Even More Quick And Dirty Casting

Following up on last week's post on casting items using Durham's water putty inside a modeling clay mold, here are the results of a tinting experiment recommended by JosefK in the comments. He suggested using ordinary food coloring to color the raw material, and whaddya know, it works great. This amulet is about 2.5" in diameter and had about five drops of green added while I was mixing it up. 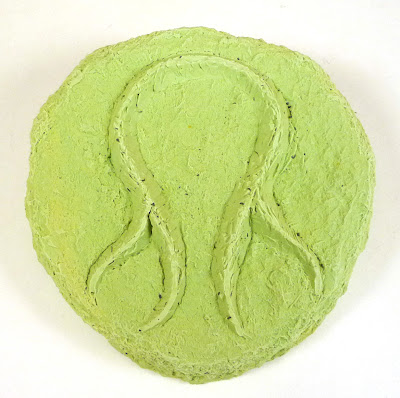 As you can see, the coloring permeated the putty with a nice even tint. I suspect that adding a drop each of yellow, blue, and red would have produced a deeper green, but the results aren't bad at all. Keep in mind that there's no reason you have to tint the raw material if you're going to be painting it anyway. I just like doing it to make any of the inevitable chips or cracks a little less noticeable.

The highly stylized depiction of Cthulhu on it's face was produced by cutting the glyph into the soft modeling clay with a sharp hobby knife. I sketched out the rough shape into the clay with a stylus and then sliced away material with the blade angled 45 degrees. Once that was done the flat face of the mold was textured with a rolled up ball of aluminum foil and some rough ridges were added to the glyph itself with a flat toothpick.

Once the putty had set up it popped right out of the mold, and after a quick wash to remove any clay it was ready to paint. One of the nice things about this material is that it practically sucks up acrylic craft paints. As soon as the wet paint hits the surface it starts to dry as the putty absorbs the moisture from it, producing an excellent bond. You might need to work with a little extra water on your brush to counteract the drying effect, but it takes paint like nobody's business. Here's the final result: 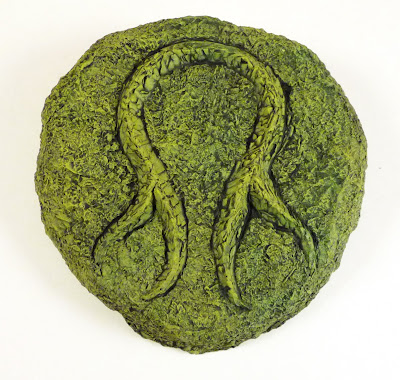 I was planning on doing this in a bluish-grey finish, but when I sat down to paint it I realized I was out of blue. That meant I fell back on the traditional green paint scheme, using dark green, light green, and a yellow drybrushing to produce the shadow, midtone, and highlights respectively, followed by a black detail wash. Even an admittedly unearthly color scheme like this looks more believable if you blend together at least three colors to produce the final finish. That said, I should probably give it at least a light wash of brown to tone it down a bit.
Posted by Propnomicon at 3:00 AM