Back in September I ran across this amazing device from a French LARP. 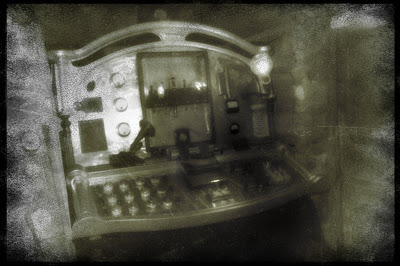 It's creator, ToNToN CoPT, posted a comment to that original story that gives some more background to the machine's creation. Here's what he had to say (with some minor formatting and spelling changes):

"For the front of the prop, it was built from many recovery stuff...A headboard for the "art nouveau" shape, an old cupboard, lamps, a beetle horn, old metallic switches, and, of course, metal, resin, wood, etc...In the backstage, there's a computer that control light and sound and even a coffee and smoke machine for the steam ;o)

It was made for two LARP games. One in the 20's (It was used as a revolutionary mad's machine, that can produce earthquakes ! It was prepared with pyrotechnical effects that can create the illusion that the machine explode, electric sparkles, stream's jet, etc...).

The second one was a Steampunk larp's game, this machine take place in a complete decor that act has an hexagonal mechanical and steam library... 3 wall was full of of books, 2 walls had lots of little brass riveted doors, and one wall with the machine itself... Players can used the machine to ask for a particular document, and after using it, the document was "blown out" by a random brass door..."

Even better, there's a video of the device in action. This is from one of the LARP events he mentioned. You'll find the machine at around four minutes in, but the rest of the video is equally entertaining.