Steve Ludnow of the Dark Door LARP group in the UK has posted a gallery of photographs from their latest event:The Last Expedition. After seeing the pictures and reading a description of the plot, I wish I'd had a chance to be there. What better way to spend a weekend than fighting Nazis and the minions of Ithaqua on board a ship bound for the Antarctic?

The ship was by far the greatest prop of them all. It is actually the residential and organisation HQ for a water activity centre in the heart of the London Docklands, run as a B&B by the Scout Association. It was built in 1933. 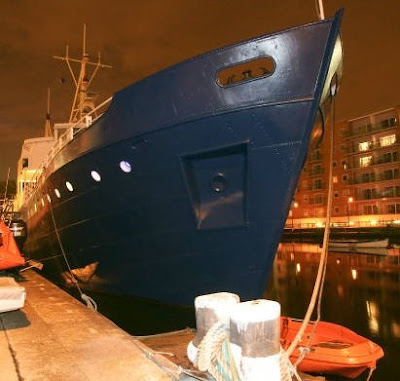 Browse around the rest of the gallery and you'll find some impressive ice zombie makeup and a scratchbuilt diving suit that really deserves a write-up of it's own. 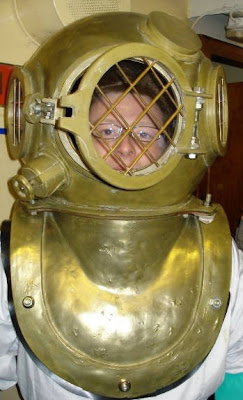 Mr. Ludnow and his cohorts also produced some great paper props, including maps, diaries, and documents like this boarding pass and an expedition newspaper. 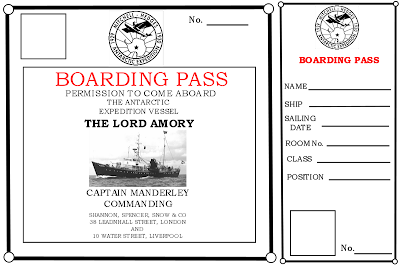 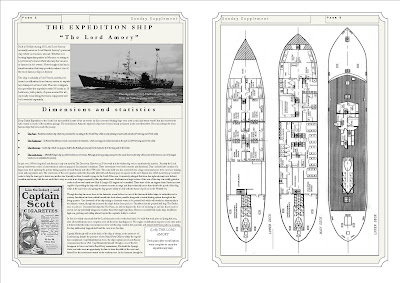 This is exactly the kind of high-immersion game I'd love to see more of, but for some reason this style of event seems relatively rare. Based solely on the coverage available on the web it also seems to be a very European thing, despite it being a style of play that was, if not invented, at least popularized in the United States by the H. P. Lovecraft Historical Society.

One possible explanation is that the largest and most immersive LARPs in the US aren't part of the conventional LARP community at all- they're airsoft and paintball games. Do a little Googling and you can find dozens of high-end scenario games featuring custom built sets, props, and costumes in support of detailed, multi-day storylines. There's a clear bias towards plots in the action-adventure vein that don't require much in the way of role-playing, but there seems to be a core group of players that take storytelling and characterization seriously.
Posted by Propnomicon at 3:00 AM

I totally agree - I wish there were more US-based LARP activities like this one.

Do you (or your readers) know of any resources on the Internet for creating an actual LARP event? As an old "dungeon master" I'm much more interested in creating the event than playing in it.

There are a few that base their games on the Cthulhu Live 3rd edition rule book here in Jersey as well as a few on the east coast that just run free form games. I have a friend in Lexington KY who has run stuff in his area with some success, and know a group in Florida that runs strange freeform Larps.
There are also a number of groups in California.