"Alien" is my favorite movie, so I was pleasantly surprised to see Jason McKittrick's first non-Mythos project under the Cryptocurium banner is a set of designs based on the xenomorph life cycle.  I've been a collector of Alien memorabilia since the move was originally released, but only started to appreciate it's Lovecraftian themes well after its debut.  Dan O'Bannon's original script was even more overtly inspired by the Mythos.  A lot of that material was lost during the project's re-writes and would later be bastardized in "Heavy Metal", "Alien vs. Predator", and "Prometheus". 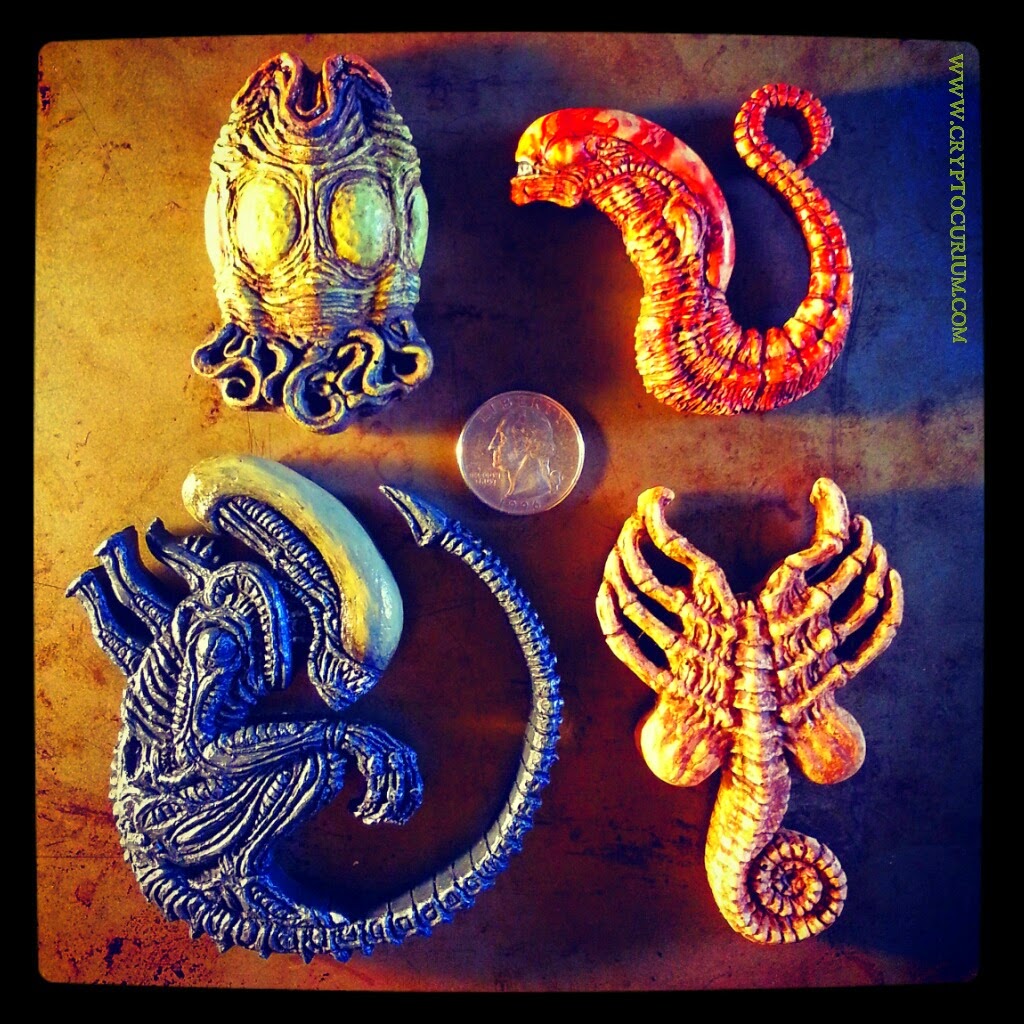 The Loc-Nar was actually from the Moebius (Jean Giraud) story The Incal. Originally they were working on making a movie, but it never mineralized (see below). Girard’s and Jean-Claude Mézières’ influence in early issues of the Heavy Metal magazine in the mid 1970s (itself from the seminal French Métal Hurlant) was unmistakable from the start. Giraud and Alejandro Jodorowsky took Luc Blesson to court for using the Incal story in the Fifth Element. Moebius was involved in Alien so the Cthulhu element is well founded. BTW, Lovecraft has a huge following in France.

The Heavy Metal animated film of 1981has the Harry Canyon sequence in which you can see is very much like The Fifth Element film in style and sometimes exact sequences. As an aside, the The Soft Landing sequence in the Heavy Metal movie, was satirized in South Park episode, Major Boobage (Season 12, 3rd episode 2008). I have to admit, having seen Heavy Metal on the big screen when the film was new, this satire actually brought me to tears laughing.

Then again I am also big fan of The Airtight Garage of Jerry Cornelius by Moebius. The main character is borrowed freely from Michael Moorcock’s series of books now called The Cornelius Quartet, which began publication in the late 1960s. These are SF books I read and enjoyed over the years, so finding Jerry Cornelius appearing years later in the Heavy Metal magazine and done by Moebius was a big plus. Now my ramble down memory lane is over.

One of the things I find really interesting about "Alien" is how it links to so many different projects. You have O'Bannon, Giger, and Moebius working on Jadorowski's "Dune", which collapses and then leads to "Alien", where they all get re-united.

While Giger and Cobb get most of the attention for their designs I think Moebius did some outstanding work, particularly in his alternate takes on the Nostromo spacesuits and the original alien temple. Bits of his temple design would show up almost unchanged in "Prometheus", while his alternate suits were a clear influence on "Outland".

To take this into even more obscure territory, Moebius was briefly attached to an effort to develop S.P. Somtow's "Inquisitor" stories into a film. If you've read any of the stories who can see why. The technology and clothing is very "Moebius-esque", but there are also specific scenes that, as described, are almost identical to some of Moebius' panel work.

The "Moebius" design for the space suits was about the only element used by Ridley Scott in the Film....

just thought you'd like to know that these made it onto io9.com