Tools of the Trade

The Viking Mythos project continues to putter along.

On the left we have a troll tooth used as a protective charm.  To the right a selection of wooden needles used for putting down Druagr, Viking undead.  I'll add some iron nails to the set when I find some that have the right length and don't look machine made.

I suspect a Norse cultist would have few qualms about trafficking with the undead, but it's always wise to have a bit of leverage.  "Do not call up any that you can not put down," as Lovecraft points out in "The Case of Charles Dexter Ward".  The sagas have various portrayals of reanimated corpses, but driving needles into their feet appears repeatedly as a means of stilling their spirits, or at least preventing them from walking. 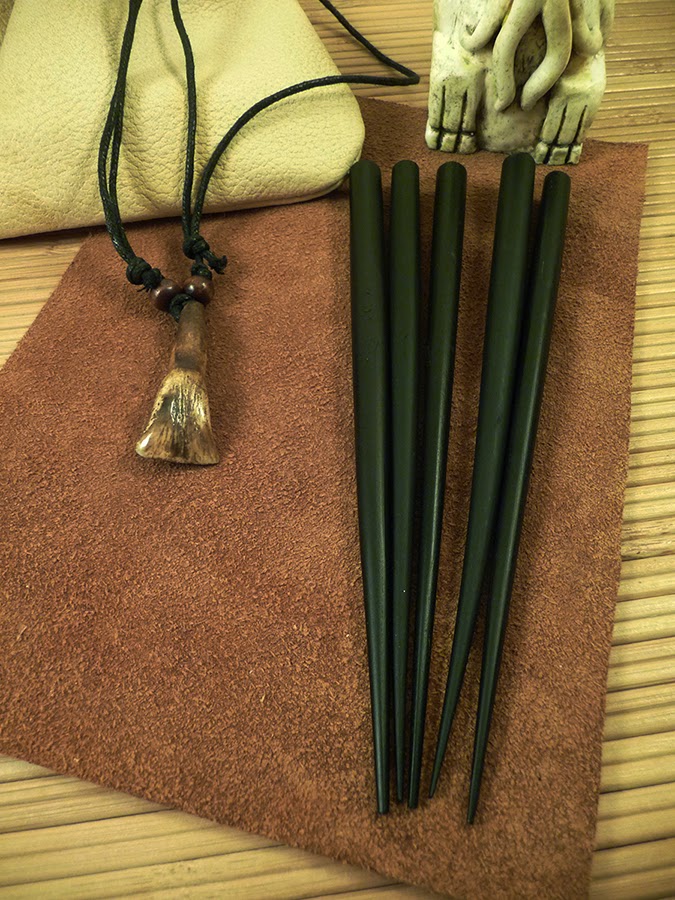 I LOVE the tooth! Really enjoying reading about this particular project. It's gonna be so cool when it's complete.

Please, do let us know if/when you find a source for those nails. I've been meaning to pick some up for a project.

Is the tooth those of a horse or a bovine?

A source of hand-made nails – from a blacksmith: http://www.popularwoodworking.com/woodworking-blogs/chris-schwarz-blog/handmade-nails-for-your-finest-work

Buy good looking nails by the pound, not bad with a little aging and work: http://www.houseofantiquehardware.com/square-head-nails

How to identify hand-made nails and their age: http://www.realorrepro.com/article/Nails-as-clues-to-age

Thank you for the very kind words.

It's a yak tooth. It's the closest thing I could find to a historical auroch.

That's just perfect. Thanks for sharing it.

What ever became of this project? Did it get finished? Did I just miss it or is it still a work-in-progress. I've gotta few of those myself.