CoastConFan has an interesting look at just what kind of revolver Dr. Watson carried during his adventures with Sherlock Holmes.

We find out in A Study in Scarlet, by Arthur Conan Doyle (written 1886, pub 1887) that Watson got his medical degree in 1878 and at some point afterward he joined the British army (rank unknown), at some time and then attached to the 66th Berkshire Regiment of Foot (no doubt in the capacity as doctor).  He was wounded during the 2nd Anglo-Afghan War at the Battle of Maiwand (27 July 1880).  Doyle may have also lumped in the catastrophic retreat to Kandahar into the action, but probably not the subsequent  Battle of Kandahar and relief itself.  Dr. Watson survived the battle and his wound, and he recuperated for a few months (presumably in India or possibly South Africa) before returning from overseas to London and leaving the army.  That would make it at least 1881 (with travel time added) or so that Watson meets Holmes in London, presuming they met fairly soon after his arrival. 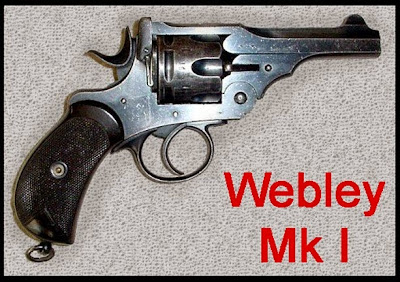 Speaking of Watson's gun, I'd love to see someone tackle is Dr. Watson's private file box from the opening of Billy Wilder's "The Private Life of Sherlock Holmes". I'm afraid I don't have enough experience with vintage firearms to try and identify the gun he uses in the film.

Thanks for the post. I’m no Holmes scholar by any means, just a Victorian tech fan. There’s a heck of a lot of information out there in books, in collections, and on the web. The full post is at: http://coastconfan.blogspot.com/2014/08/john-hamish-watson-md-or-mystery-of.html

I hadn’t though to that movie in years. In the script of The Private Life of Sherlock Holmes, the revolver is identified as belonging to Holmes, not Watson. But then again I suggested that the guns were held in common in my article, didn’t I. The revolver appears to be a style popular with the manufacturing shops of Liege, Belgium and a lot of Bulldog copies. The old-fashioned gate load and the clumsy swing out ejector that houses the rod within the cylinder pin when not in use is typical as is the grip. Ultimately, I don’t know what the prop manager used and I even resorted to the IMFD (see below).

Private Life of Sherlock Holmes is a quirky film, farcical but also melancholy as if they couldn’t make up their minds what kind of movie they were making. It doesn’t have the edge of The Seven Percent Solution and (thank heavens) not as silly as other Holmes satires.