Another Tillinghast specimen.  This cuddly little critter was inspired by a thread at the RPF involving  a gaff by Dr. Takeshi Yamada.  More specifically, what he used to craft the body of his Mongolian Death Worm. 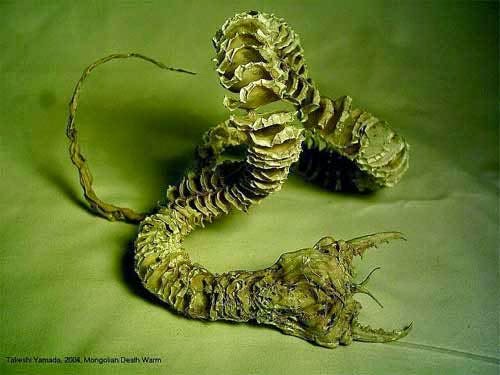 I wish I could credit my extensive education with recognizing what it is, but the truth is far more pedestrian.  I lived in coastal Massachusetts for a few years and frequently encountered these while beachcombing.  It's the egg case of a whelk. 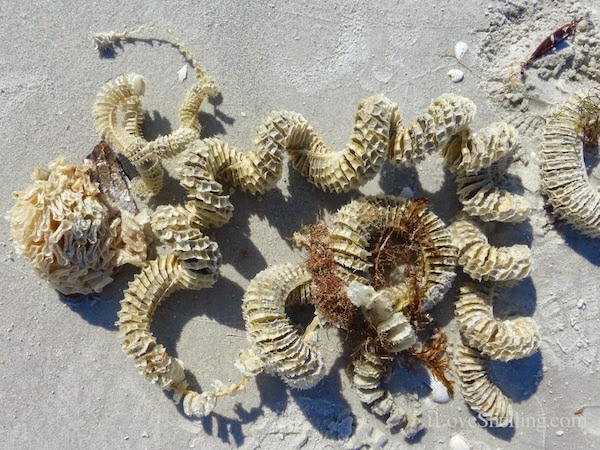 They're an amazing piece of natural engineering.  Each casing contains dozens of separate compartments where the juvenile whelks mature before escaping into the sea.  The resulting texture is a perfect body form for a worm-like creature gaff.  Add an interesting head and sweet, sweet ickiness ensues.

Here's my take.  I picked up the egg casing from Ebay.  They're a popular element for beach-themed design pieces and pop up pretty frequently. 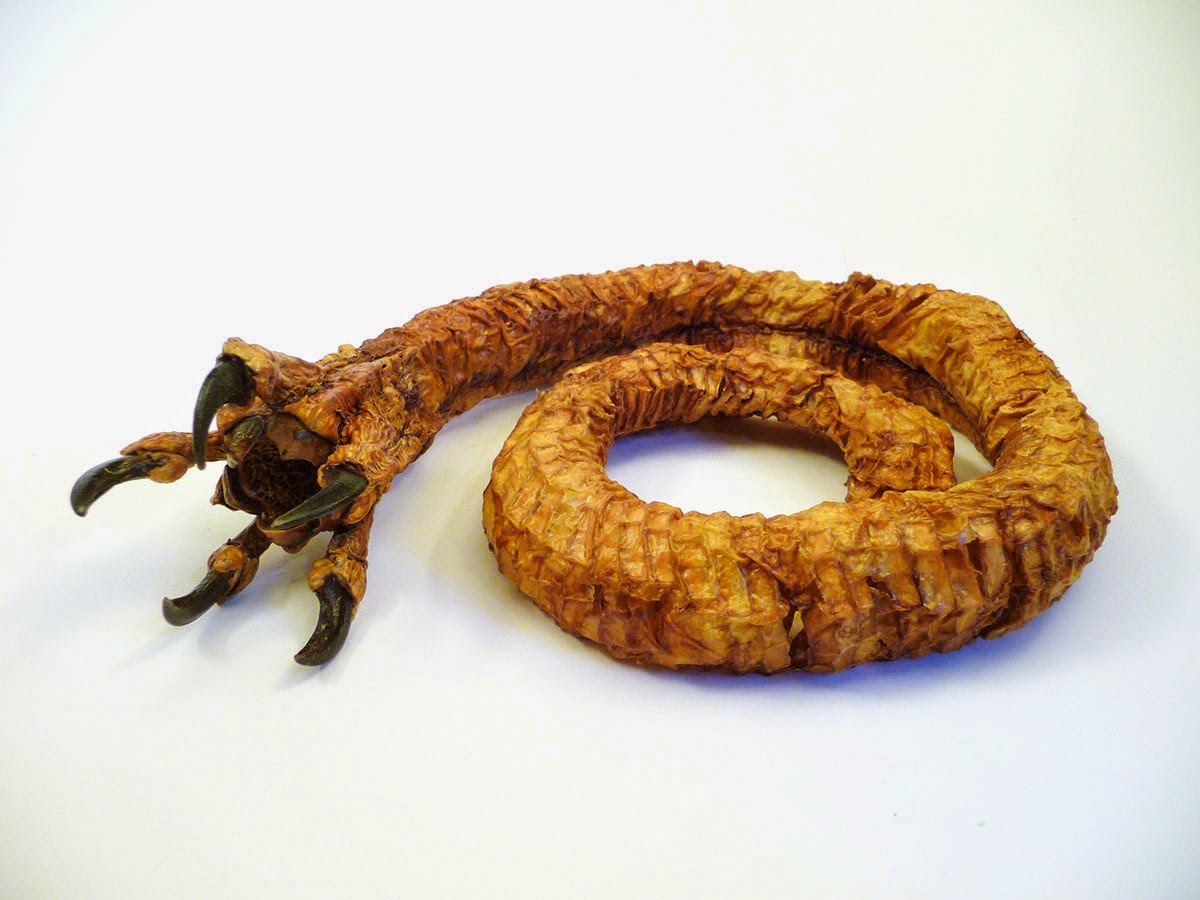 I'm really happy with how this came out.  As I mentioned a while ago, I've developed a sensitivity to Apoxie Sculpt epoxy putty that forces me to wear gloves and use tools for any kind of sculpting.  Frankly, it's the best thing that ever happened to me.  I'm not sure why, but my sculpting ability has taken a huge leap.

Here's a closeup of the mouth.  The five inner teeth are patterned after a squid's beak and alternate with the external grasping pincers.  The claws are...claws.  Coyote claws, specifically.  The entire head structure was sculpted over an armature made from bamboo.  Once I had the basic form I just started adding layer after layer of texture to duplicate the look of a partially decomposed creature. 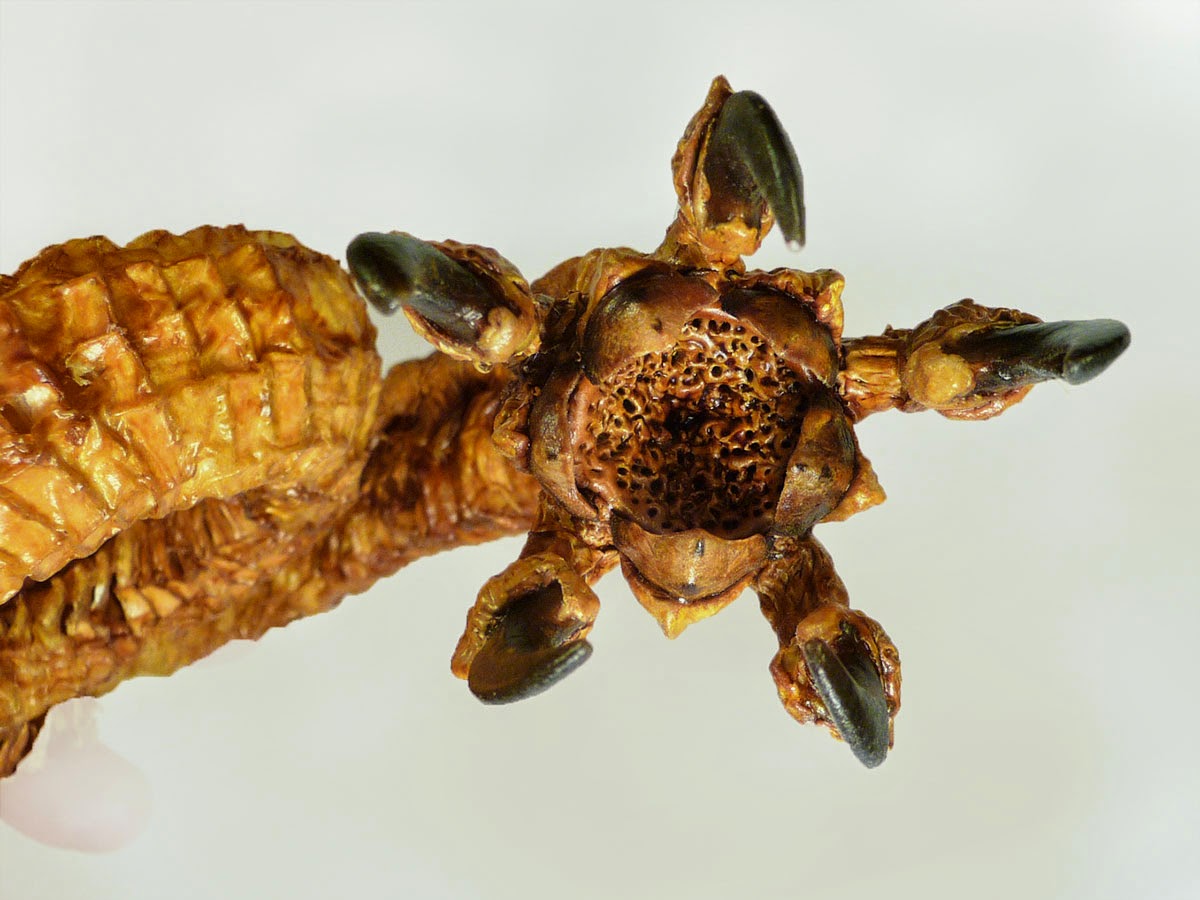 Once the head was finished I gave it an ivory base coat and used epoxy to attach it to the egg casing. 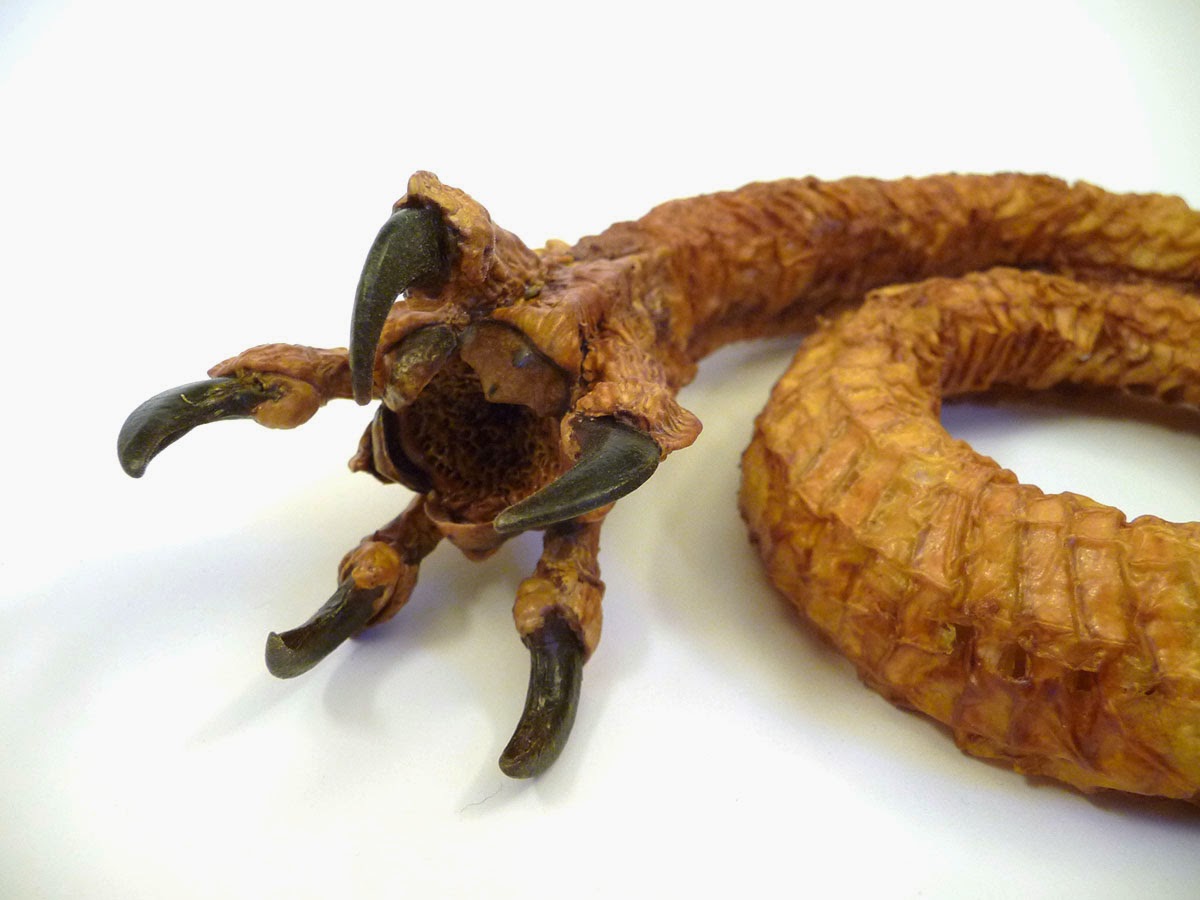 After that I applied a torn, ripped layer of tissue paper to the body with white glue to recreate the look of damaged skin.  More glue and some loose plant fibers helped blend the join between the sculpted head and the body.  The entire creature was lightly drybrushed with white to bring out surface highlights and then washed down with brown ink.  The final finish comes from a coat of my beloved shellac. 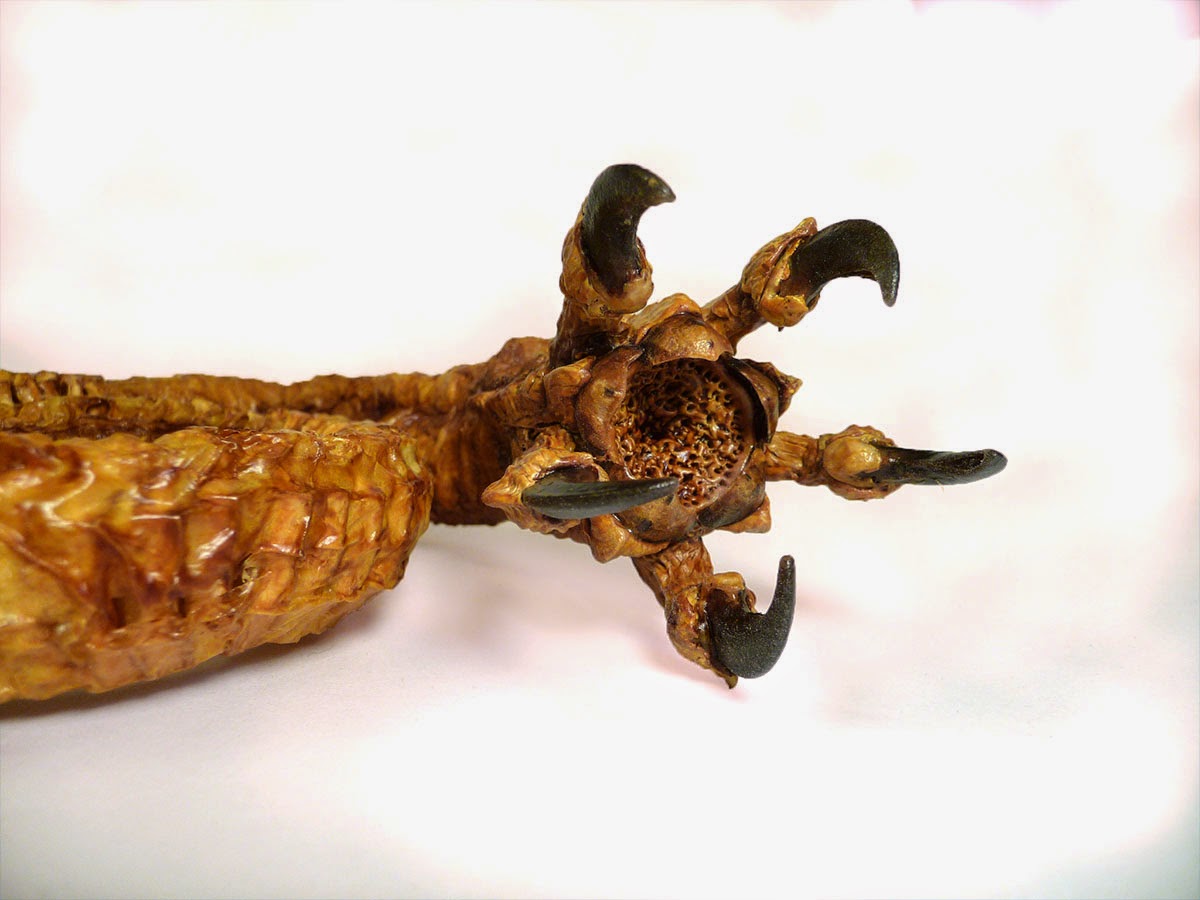 One of the cool things about the egg casing is it's translucency.  It's a very convincing double for a segmented, cartilaginous skeleton.  I tore the skin away in sections to take advantage of that awesome internal structure and let the viewer see light shining through the segments. 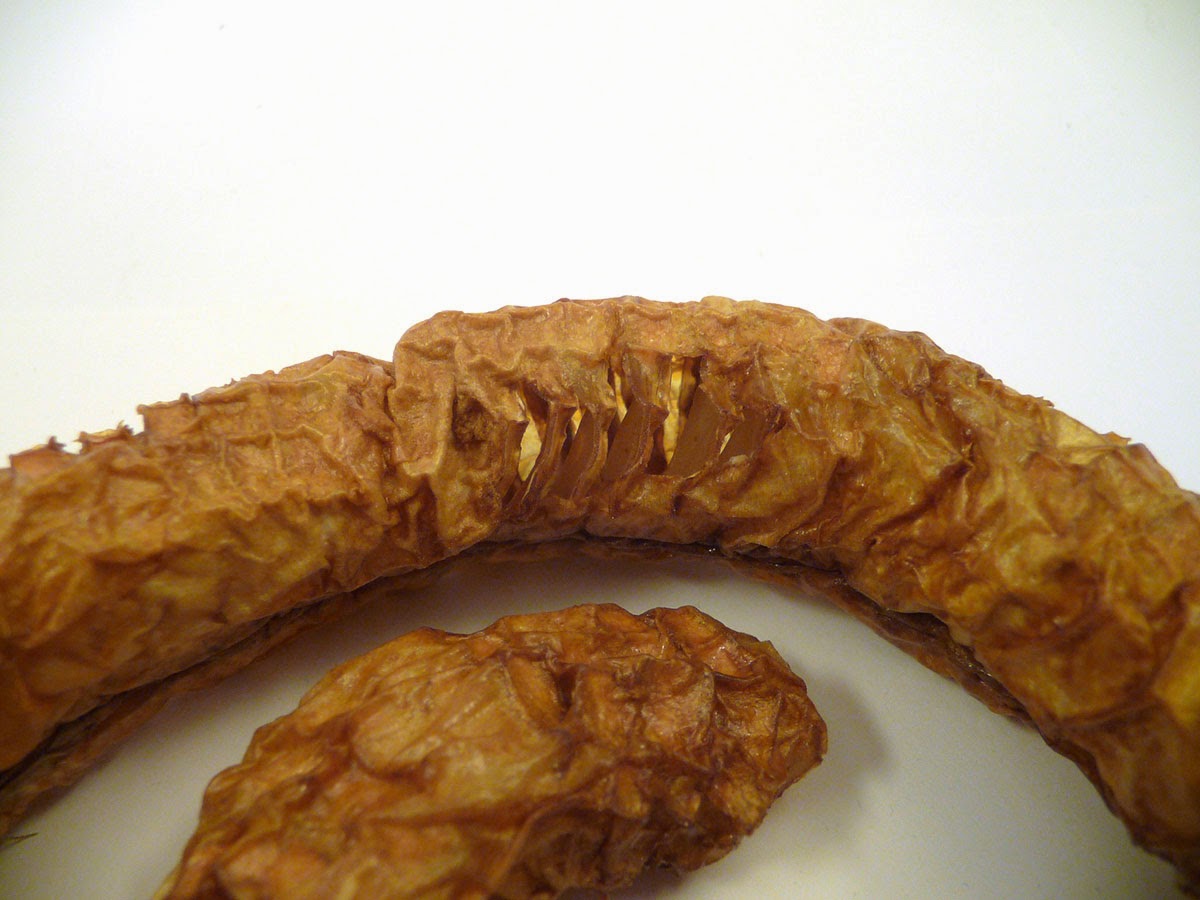 Just right click on any of the pictures to open up the high resolution versions in another tab.
Posted by Propnomicon at 3:00 AM

This one is really stunning! I particularly like how you've torn the skin away in places to show the internal structure. I think that little detail finishes it off nicely.

I can see why you keep coming back to the creature from beyond theme. I made one myself, and found it was so much fun that I'll probably have to make some more. Photos of my effort are here:

I follow your blog daily, and have for more than a year. I must say that this is your finest work to date. This is an amazing prop! - Levi

This is really nice! I feel the urge to attempt something similar myself.

That’s really very clever and innovative. I was thinking whelk casings would be a good addition to a Giger-esque biomachine relic prop. Found items reimagined and repurposed into completely different items is a skill that always astounds me. In fact there is a whole art to that skill http://www.pinterest.com/caryclark/reimagined-junk/ and http://www.pinterest.com/dadasmama/repurposed-recycled-reimagined/ and http://ahmadalijetplane.wordpress.com/2014/02/28/charming-colourful-portraits-from-junk-by-jane-perkins/ and http://empressofdirt.net/gardenjunkartdogs/ just to show a few quick hits on Google.

Thank you for the kind words.

I absolutely love the paint job on your critter. The tonal work and countershading really brings it alive.

You're very kind. Given the results I wish I'd become allergic to epoxy putty a lot sooner.

Giger-esque is a perfect description of how they look.

Thanks Propnomicon! Coming from someone who does the kind of awesome things with skin colour that you do, that means a lot to me.