No, this post isn't about H.P. Lovecraft's extensive correspondence.

The FBI is now asking for the public's help in finding the writer behind a series of anthrax threats that have been sent out from the Syracuse, NY area for the last 15 years. What makes the matter of interest, beyond the fact that I live in the general area, is that many of the letters include quotes from H.P. Lovecraft.

One peculiarity stands out about the letters — many of them contain passages from the writings of H.P. Lovecraft, an American author of horror, fantasy and science fiction, especially the subgenre known as “weird fiction.” He died in 1937.

Lovecraft’s guiding philosophy was what he called “cosmicism,” or “cosmic horror.” It’s the idea that the universe is hostile to the interests of mankind, and his stories often express an indifference to human beliefs and affairs.

Capone read three of Lovecraft’s books, looking for clues. Some of the letters include a hand-drawn eyeball, which might be a reference to a specific Lovecraft character, Cthulhu, Capone said. It’s a gigantic creature that lives silently under the ocean, waiting for a cosmic time to rise up. In one story, Cthulhu’s described as having tentacles coming out of his face and one all-seeing eye. Many of the letters include little drawings of daggers with dripping blood, Capone said.

He’s hoping someone might recognize the Lovecraft references and call in a tip.

Here's a scan provided by the FBI of some excerpts from the threat letters. 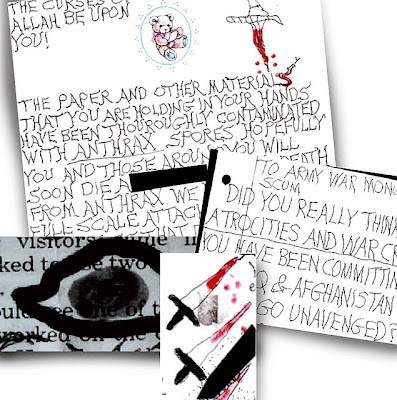 Not suprisingly, investigators expect that the person behind the anthrax threats has extensive experience with the mental health system. The one quirk of the FBI's flyer that seems unusual is that they don't include any of the quotes from Lovecraft used in the letters.

It was funny to see in this morning's newspaper that they ran a photo of Lovecraft along with the story, but it was a fake, Lovecraft's face on another body with tentacles shopped in. Good work Syracuse Post-Standard.

Heh. I see they're practicing for their move to an online operation. I'm surprised Sean Kirst didn't weigh in on this. I believe he's quite a Lovecraft fan.

Oh, and for anyone that's curious I deleted one comment because it was a double post of Redwalker's message. Blogger has been a bit wiggy about that lately.

Wait a second, I call shenanigans. In what story is Cthulhu described as a cyclops? I mean, yes his house is described as 'cyclopean,' but I am pretty sure that is just a metaphoric reference to its giant size. This purported connection seems highly tenuous.

Also, I have to confess a certain degree of disappointment that this ostensively "Lovecraft-inspired" criminal would employ such pedestrian tactics as a fake anthrax scare to inspire terror. Where are the hoarse whispered blasphemies in the night, the rambling, incoherent descriptions of unspeakable rites? Are we supposed to be scared by that teddy bear picture? "The curses of Allah be upon you?" That is some weak sauce there, dude.

Pushes Lucy out of her chair in the Peanuts Psychiatric Help 5 Cents booth. It’ clear that the writer is both imitating a child and is himself trapped by childhood. The silly daggers and absurdly lettered note and the like belie the pseudo antiwar statement that is just a prop for his feelings of disempowerment. I would almost say it is a criminal hoax, but these things can escalate too. Clearly, this clown had no idea about Lovecraft and the stupid press latched on to his ignorance and magnified it with their own. Rather than exposing, educating, and informing, the modern press is just a mirror of the baseness of their readers, albeit a funhouse mirror. The doctor is out.

But I am glad that Propnomicon did post this stuff, the tiny chance that somebody might recognize the drivel and lead to incarnation of this buffoon is worth the photons. The unibomber (not capitalized on purpose) was caught in just such manner.

I don't recall Cthulhu ever being described as an "all seeing eye". Perhaps they're confusing Lovecraft with Tolkien. Personally I think they just found a single vague reference and ran with it thinking "Scary pop-culture we don't understand makes better headlines".

I think there may be some context for the eye as Cthulhu idea in the text of the letters.

And not to get all super-sleuthy, but I get the impression that the eye symbolism may be tied into the depiction of Leviathan in the Illuminatus trilogy. That impression is no doubt helped along by the conspiracy nut style rants in the revealed text.