A pair of Cthulhu idols from "Shan". These were apparently done as bookends and cast in a short run distributed amongst a group of friends. They're a good example of what I've taken to calling the "Cthulhu Underground"- the hobbyist sculpts and castings that have extremely limited, unpublicized runs. There are dozens of these projects floating around. For the most part they're totally off the radar until, as in this case, someone posts a picture of them that Google eventually indexes. 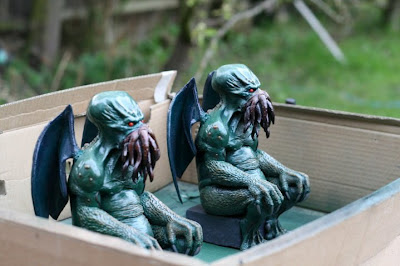