Wings Over Antarctica: The Backtracking

After weighing all the feedback I've decided to stick with using the Dornier Do-J "Wal" as the Dyer expedition aircraft.

There's certainly a case to be made for the Merkur, but in the end I found myself agreeing with those that sided with the Wal. Frankly, it just looks better. The Merkur is a fine little aircraft, but it suffers from looking like all the other single-engined planes of the classic era. The Wal is nothing if not distinctive.

Here's the basic color logo I'll be using for the next run of swag. There are some relatively trivial composition and scale changes, but the biggest difference will be in the background colors. The dark blue of the original design will be lightened a few shades to provide more contrast with the plane in the embroidered versions. The dark grey of the outer text ring is now the same red as the Miskatonic University logo, giving the overall design a bit more pop.

I'll finish up the black and white version, and a stencil template for marking gear and equipment crates, over the next few days. 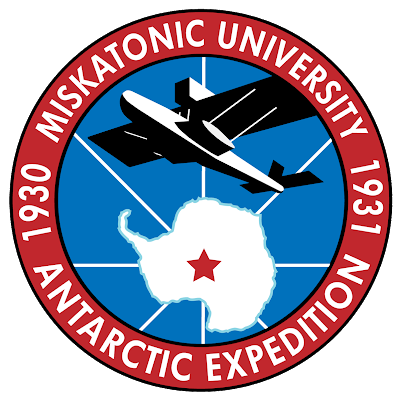 It's a sharp design. Glad you're going with this one.

Excellent work on this design. It looks great!

Sorry, I prefer the Merkur II. It may look less distinctive to someone well-versed in ca. 1930 aircraft designs, but to a modern eye it looks just as distinctive as the Do-J. You still have the problem of skis -- the logo doesn't include them, and how is a Do-J supposed to land on perrenial ice without tipping in the wind and dragging a wingtip?

@Joe Moran: See the amphibious Do-J make a water landing as even as you like, without tipping over and going underwater, dragged by that top-heavy engine -- surely even more of a "tipping" risk than during an ice landing, if those wide floats either side of the fuselage weren't adequate stabilizers:

I didn't know those were floats, thanks. I looked up Amundsen's 1925 expedition -- he used a pair of Do-J planes and improvised some airstrips on the ice. I guess it's as Propnomicon wrote in his waffling post, strong arguments either way.

@Propnomicon: A sudden thought. Your regular embroidered patches are shoulder (= upper-arm) -sized, which is about what most of us would want and can afford. But, as a byproduct of your dealings with the patchmaker...

Without actually making up any larger patches, like back-of-jacket size, is it possible to generate computer files for their embroidering?

Such that, if preferred, they can be embroidered directly into the jacket fabric (or leather) itself, rather than a separate patch?

Because then you might be able to sell transmission of the file to a local embroidery shop for a one-time use (i.e. placement into a leather jacket's back) as another marketing method. Feasible?

I'm late to this party, but after favoring the Wal for many years, you've brought me around to the Merkur…which seems proven by the following (emphasis added):

"Danforth got THE engine started without trouble, and we made a very smooth take-off over the nightmare city."