The climax of H.P. Lovecraft's "The Shadow Over Innsmouth" features a massive raid on the seaside town by FBI agents and Federal troops. The attack includes a naval component, including a submarine that fires multiple torpedoes at the Deep One city off the coast. As I've mentioned before, the dates given in the story almost certainly identify that submarine as the S-8 (SS-113).

Jason Seaman was kind enough to send over a link to a fantastic repository of pictures of the S-8 at the NavSource naval historical site. I've browsed the page in the past, but it appears they've added a lot of new material including photographs and a schematic diagram. 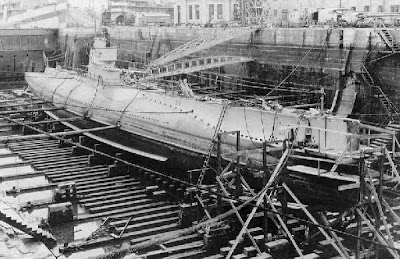 For she dived off Devil Reef
To torpe-edo Y'ha-nthlei,
But returned, to her relief,
Though cut and scarr-rr-rred and torn away.

P.S. As a trivial demonstration of wikiality/truthiness, please see the name of that reef throughout Wikipedia, and then please do a ^Find-command on the word "reef" throughout the original Lovecraft story.

I'm glad I had some napkins handy to clean off my monitor.