In an alternate universe not too far from our own, George Pal's 1978 production of "The Call of Cthulhu" is still hailed as a classic. After his attempted production of "Doc Savage: The Man of Bronze" fell apart because of rights problems with the estate of Lester Dent, Pal was searching for a possible franchise. Following up on a suggestion from writer Phillip Jose Farmer, who had drafted one of the Doc Savage screenplays, he discovered the works of H.P. Lovecraft.

It was a classic example of the right story at the right time. Pal was still bitter about the studio's effort to "camp up" his Doc Savage film and decided "The Call of Cthulhu" would be a serious drama. Suprisingly, the studio agreed, thanks in no small part to the box office success of period efforts like "Chinatown" and "The Sting". Michael Rennie, David Suchet, and Michael York were signed to star, but it was veteran character actor George Coulouris who would garner an Academy Award nomination for Best Supporting actor in the role of "Old Castro".

Despite it's relatively modest budget the film boasted incredible animated sequences produced by Ray Harryhausen and Gregory Jein. For over a year after principal photography ended the pair slaved away in a small studio bringing "Cthulhu" to life using a new filming technique. In traditional stop motion animation the puppets are moved a fraction of an inch each time a frame of film is clicked off. When projected at normal speed those individual frames blend together to produce the illusion of a living creature, but the results can be jerky and look artificial. Harryhausen and Jein used small rods to actually move the puppet while the film was being exposed, producing a far smoother and more realistic blurring effect. The puppet footage was then combined with additional rotoscoped effects and the live action plates in one of the new, high registration optical printers developed for Star Wars. The result was an epic sequence that helped redefine the capabilities of stop motion animation.

That exercise in alt history is my hopefully entertaining way of introducing this old school animation puppet of a nightgaunt from Richard Svensson. It has a very Harryhausen-esque feel, and I mean that as a high compliment. You can see it in action over here. 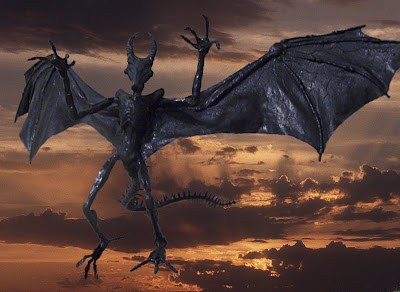 Is this, then, a glimpse of what "Cry of Cthulhu" might have been?

Ah, the things that are lost to us, that we know not we have missed...

By "alt history" did you mean made up? lol Because otherwise i'm realy confused