The Realm of Salama 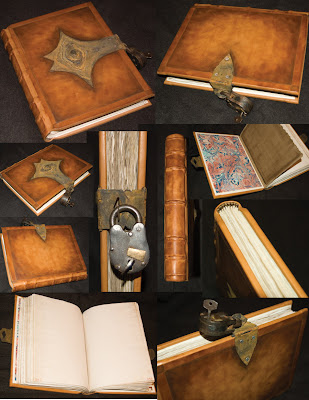 This makes me wonder about locked clasps on leather/board/wood covered tomes.

How secure is that? If someone wanted to get at its contents, they could just remove the entire clasp. This tome, you could cut the rear clasp bracket off with a knife in a few minutes. You're basically protecting the contents from the most apathetic, lazy people. It's for people that keep their arcane knowledge on the coffee table and don't want guests casually flipping through it.

Surely there would be ceremonial and aesthetic value to it, but security is not.

You could give the book metal covers, as that would increase the sophistication of the tools needed to open the tome, but then you have exposed pages that could probably be carefully pulled out.

So short of a locked case, a properly secured tome would probably have to have some sort of series of fold-up, interlocking flaps that, when closed, turns the entire cover into a box.

Good points, Lord Auron, unless of course the lock is to keep something in rather than keeping inquisitive readers out. I'm reminded of Terry Pratchett's Unseen University Library where the books are chained to the shelves for the readers' safety.

I'm sure I've read somewhere (sorry for vagueness, will have to go and check sources) about the 'book curses' used by some monks. In a time when readers were the exception rather than the rule, books were viewed by many with a superstitious reverence. Even some of the most ecclesiastic works might include a 'curse' written on the first page, offering dire threats to any that would presume to steal it. Orcadian folklore mentions a 'black book' supposedly penned by the Devil himself and granted to witches in exchange for their souls. The only text of this supposed work to have survived in folk memory is from the frontispiece: "Accursed be he that peruseth me". Now this may be a neat piece of North Isles folklore, but given the historical importance of St Magnus' Cathedral, it's tempting to think it may've been a corrupted folk memory of an actual book...