The invaluable CoastConFan posted a link to these goatskin shrunken heads in the comments for yesterday's post. As he pointed out, for less than $20 bucks these would make an ideal base for crafting your own tsantsa. They're a bit goofy as is, but could be turned into real showpieces with a little bit of remolding and some patination. 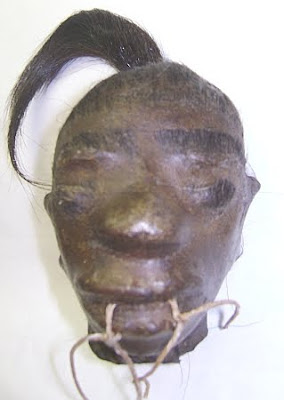 (My apologies for the horrible joke in the title, but it's one near and dear to my heart. One of the reasons I went into broadcasting is because of the "Stop! A Head." bit by Steve Dahl and Garry Meier. It originally happened in the summer of 1981 when I happened to be visiting relatives in the Chicago area, and to this day it's one of the funniest and most horrific things I've ever heard on radio.

A nasty car accident in the city resulted in a gruesome decapitation death during rush hour. Making the whole thing even more terrible was the fact that rescue workers couldn't find the victim's head. As soon as the news broke Dahl and Meier speculated about where the missing head might be, and eventually launched a scavenger hunt with prizes to locate it.

Years later I learned the bit was a set-up, but to this day I'm in awe at the sheer hilarious perversity of it.)
Posted by Propnomicon at 3:00 AM

What's that up in the road ahead?

What's that up in the road? A head?