I'm not a jewelry person. That's probably because there aren't more jewelry artisans like B. de Corbin, creator of "Alexander's All Seeing Eye" It's a beautiful piece of work made even more interesting by it's intriguing backstory.

"Gaspard deserted the French army somewhere East of Luxor and made his way back to France. Soon afterward he began appearing in public wearing a turban, claiming to have extraordinary psychic powers. Exactly what he claimed to be able to do is unclear, but he somehow amassed a great deal of money, and, for a guy who smelled like boiled sweetbreads, he was remarkably successful with the ladies.

The famous poet Pierre Chatmondeaux joined Gaspard’s growing band of followers around 1810. A period sketch of a strange amulet to which Pierre attributed Gaspard’s strange powers still exists, and, of course, there are these lines from Chatmondeaux’s well known poem The All Seeing Eye -

What foot is this which stirs the earth
Of Alexander’s long forbidden tomb,
And drags from ancient burial dust
This eye to pierce such violent storms?
(Chatmondeaux, 1812)

After D’Cardigan’s remarkably tidy death (in 1814, his dismembered corpse was found divided between seventeen magnum Champagne bottles, carefully corked, arranged in a meandering line along the Champs D‘ Elysees), the Amulet, which had by then become known as Alexander’s All Seeing Eye, vanished." 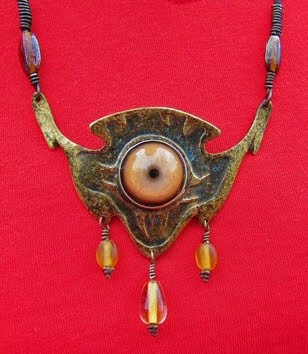 Posted by Propnomicon at 9:00 AM

Very nice piece, and a great little story behind it.
Wearing that would definitely get a lot of attention, and as a magical ritual amulet would work a treat!

Thats really a first rate work of art. And I agree, having a back story for a piece like this definately adds that extra special touch.

As with all of de Corbin's work, I LOVE the attention to detail. Back-stories are just the perfect icing on the perfect cake!