This is a conjectural "Seal of Dagon" based on the trident design used in Stuart Gordon's 2001 film "Dagon".

As a low-budget adaptation of "The Shadow Over Innsmouth" it has it's moments, but one thing I really enjoyed was the design work for the "Deep One" architecture and implements. It's suitably organic and evocative of deep-ocean life forms without ripping off H.R. Giger, a design trap that far too many low-budget films fall into. Personally, I think "Gigerization" happens because production designers without a lot of money to work with look at Giger's work and decide that "organic" means "covered with corrugated plastic piping". Since corrugated plastic pipe is cheap, and you can stick it into and onto almost anything, we get film after film with piles of props and even entire sets built from great snaking mounds of the stuff. Sci-Fi Channel, I'm looking at you.

In addition to drawing on the "Dagon" trident for inspiration I wanted a South Seas feel for the seal, in reference to the original home of Innsmouth's Deep Ones. Something that would echo Maori moku designs or Polynesian aesthetics without falling too deep into the "tribal" design ghetto. You can decide for yourself if I succeeded.

As always, click through to get the full-size version and then save it to your hard-drive. 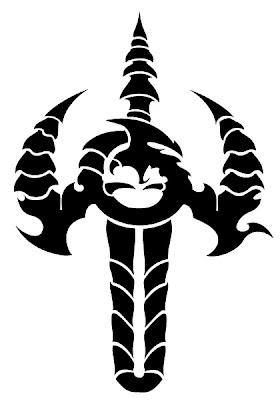