Those questions may never be answered, but now you can own a small piece of that ill-fated expedition's history: the famed "Wings Over Antarctica" Miskatonic University Expedition Patch. 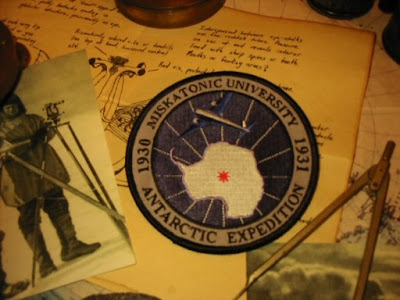 Each 4"(10cm) diameter patch has an iron-on backing so they can easily be attached to the garment of your choice. The price for European customers is slightly higher because of the increased cost of shipping.
Posted by Propnomicon at 3:58 PM

Labels: At the Mountains of Madness, Buy Cthulhu

I'm not seeing a trademark comment here, so I'm guessing that you're not aware that "Miskatonic University" is a trademark belonging to Chaosium. You may want to check with them regarding this (and any future cool props) just to steer clear of any potential infringement issues.

Just received the patches...fantastic! Now I just have to pick out a jacket to sew one on. Then I need to continue organizing my 2009 expedition to the Teng Plateau...any volunteers?

I wouldn't worry too much about Chaosium. "Miskatonic University" is not a trademark of Chaosium's, no matter who's making the claim. As the copyright status of Lovecraft's works appears to have lapsed (based on the researches of S. T. Joshi), you're probably in the clear.

the patch is beautiful, but excuse my textile ignorance: is this supposed to be iron on, or does it have to be sewn?

It is indeed an iron on. As much as I respect the folks who can handle a needle and thread I'm not amongst their number.

Radiate, vegetable, monstrosity, star spawn - whatever he had been, he was a genius!

I cannot tell you how insanely cool the actual patch is. My day is complete.

I would like to buy a pair of these fantastic patches. Do you still have any? Thank you in advance.

I also want to get one! It would be very nice if someone would tell us if any will be produced.