A thwarted theft attempt at the Mausonion Museum has brought this curious African artifact to light.  Rick Sardinha has the details:

Earlier this spring, the museum security patrol surprised an intruder in the basement storage area.  A number of large crates had been opened but the thief fled empty handed. The broken crates were all from a shipment from Nairobi dated 1893.  Shattered pots, masks and ancient weapons lay scattered across the floor.  The items were collected, assessed, cataloged and put back into storage. Of the many invaluable artifacts and cultural fetishes, one item stood out from the rest.

It was a statue depicting Cthulhu. The overwhelming stylization of various African cultures fixed its origin and created a mystery to the presence of this Polynesian demigod on the African continent. Obviously, a connection between cultures, unknown and unexplored. Initial assessment of the item describes a deity artifact, approximately seven inches high, four inches deep, and nearly 12 pounds in weight. Created from a lump of raw iron and wire,  it is riven by twenty two old nails. Age of the figure has not been determined though the nails are common construction items from the late eighteenth century. I found the piece to be a truly brutish vision and repellent to the touch. 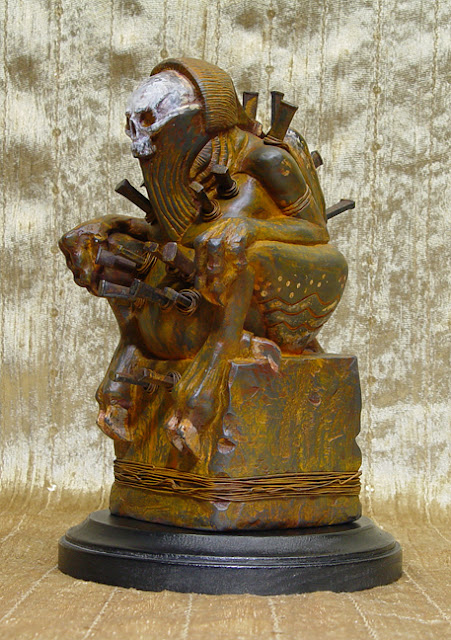 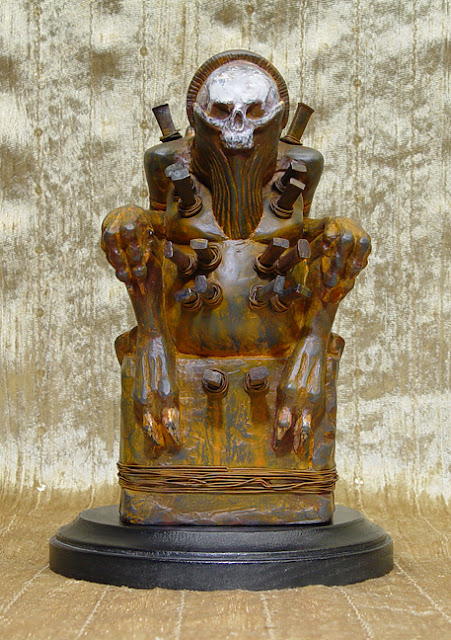 Mr. Sardinha has done an outstanding job of interpreting the Mythos through the lens of African tribal traditions.  On its own this is a fantastic piece, but it would make an killer prop for anyone running Chaosium's  "Masks of Nyarlathotep".
Posted by Propnomicon at 3:00 AM

This is an interesting spin of a nkondi nail fetish figure. The Mythos connection is that these came from the area that is roughly congruent to the old Kingdom of the Kongo. If you recall Lovecraft’s story The Picture in the House (1920), a book seen in Capt Holt’s house was Regnum Congo (originally Relatione de reame del Congo 1591). It was written by the Ventian mathematician and explorer Filippo Pigafetta (1533-1604) along with the Portuguese sailor Duarte Lopes. European contact with the Kingdom of Kongo came in 1483 when Diogo Cao sailed up the Congo River, but that’s another story.

Pigafetta sailed with Portuguese explorer Ferdinand Magellan on the world’s first trip around the world 1519-1522 – BTW, Magellan didn’t make the whole trip. For those of you with an interest in Steampunk or Victorian CoC gamming and would like a narrative of the horrors of the Belgian Congo era, try the book King Leopold’s Ghost by Adam Hochschild (1998). Of course Joseph Conrad’s Heart of Darkness (1899) would be of inspiration as well at least for setting the mood. My familiarity with nail fetish figures is having seen one in a friend’s collection some twenty years ago and it had a “creepy” feel to the figure.

Info on the nail figures
https://www.khanacademy.org/humanities/art-africa/central-africa/democratic-republic-of-the-congo/a/nkisi-nkondi