And I mean "garage sale" quite literally. I've been cleaning out the garage and discovered a bunch of prop items from old projects.

First up, we have the leftovers from the Miskatonic University project. This includes the full size (30") Miskatonic sports pennant, three of the Miskatonic Field Journals, and a selection of postcards. As usual, I'll throw in some extra stuff. I'm a big believer in lagniappe.

One caveat- the pennants were originally creased during shipping, so I'll be sending them flat packed in an oversized mailer. They'll have to be ironed or wetted and dried flat when they arrive.. 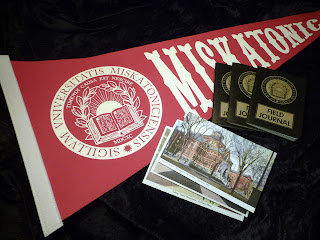 The price for this set is $20 in the US, $25 internationally. I only have a handful available, so when they're gone they're gone.

Update: And...they're gone. My thanks to everyone that bought one.

I also have "The Black Heart of Nephren-Ka".  Well, that's what I've been calling it while it sat on my shelf.  It was originally done as a commission for someone that wanted a mummified troll heart similar to the vampire heart I did.  Sadly, after I finished it they decided that they wanted it in a green/black color scheme instead of the normal reddish tint.  Trolls having green blood and all that.  The green version came out just fine, but I was left with the original.

Like the earlier vampire example this is an extremely realistic depiction of a mummified heart.   The biggest difference is that this is sized for a troll that stood around 9' to 12' feet tall.  It's roughly 150% larger than a normal human heart, measuring approximately 8" high and 6" across.  The severed remains of the various veins and arteries are present and you can actually use a flashlight to peer inside if you're so inclined.  Click on the pictures below for the large version.  That should give you a good idea of the level of detail. 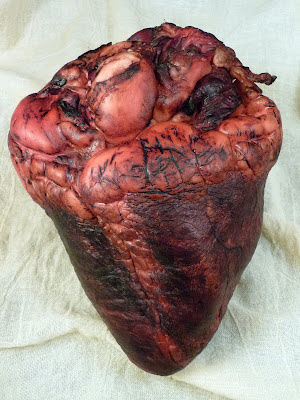 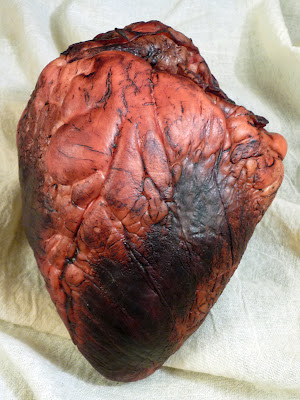 This wasn't intended to be just a display piece.  Although the finish looks unbelievably nasty, with clotted blood and grime, that's just a harmless surface coating of tinted wax.  It feels like an old piece of beef jerky, and if you give it a rap with your knuckles you'll hear a satisfying wooden "thunk".

The mummified heart will require a periodic buffing with furniture wax if you live in a hot climate or handle it for extended periods of time.   Just for the sake of safety I should mention that it should never be exposed to an open flame.  Because of the wax coating and the materials it's made of it will merrily burn until there is nothing left but ash.

The mummified heart is $100 including shipping inside the US. Unfortunately, because of the aforementioned flammability it can't be shipped internationally.

This set is more than awesome, its a must have.Very well done,just like everything you do.

Thanks for the kind words. Now I just need to quite fiddling around with the ATMOM project and get that one finished.

I'd have liked a set of note books. I've been at work all day and just got in. :(

Drop me an email and I should be able to help you out.

damn! Well Those things were for available for atleast a few minutes,haha. Looks like there's a good market for troll hearts.

I wasn't around for your first run,but how can I get a hold of your ATMOM package when you're done with everything?

I'll just have to wait to get my mits on one of your ATMOM sets when they come out instead. Just hope they don't sell out as quickly. ;)

Are there any field journals left and how do I purchase one?