"At the Mountains of Madness" Project Update

Work on the "At the Mountains of Madness" project continues.

Last week I mentioned a few problems I'd encountered.  Thanks to your suggestions two out of the three issues are close to being resolved.  I've found two boxes that appear to be ideal for the deluxe sets and should be getting samples by next week.  The difficulty with finding unbranded photographs is still a bit iffy, but I think I'm close to finishing that up as well.  As of yet I still haven't found a professional printer that can handle printing the sketches on textured art paper.

Over the last week most of my time has been spent doing research.  I've steadily amassed quite a collection of books on the history of Antarctic and polar expeditions.  One of the most useful has been Polar Exploration: The Heroic Exploits of the World's Greatest Polar Explorers

from the Royal Geographic Society. It's a coffee table book offering a broad overview of the subject written by scholar Beau Riffenburgh.  What sets it apart from other popular history books are the included documents.  It's absolutely chock full of removable sketches, notebooks, diaries, letters, and other ephemera drawn from the experiences of polar explorers stretching back to the mid 18th century. 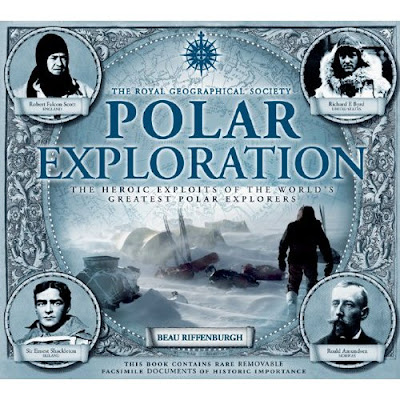 If you're considering running Chaosium's classic "Beyond the Mountains of Madness" adventure I would highly recommend this book.  For gamemasters and players alike it's a great introduction to the history of polar exploration that conveniently runs right up to 1929, the year before the original Miskatonic Antarctic expedition.  It's not an in-depth read, but the heavily illustrated text and included documents are an ideal way to get into the spirit of the expedition.  Players will get a real feel for the kind of challenges they'll be facing on the ice, including the horrific consequences when something goes wrong.  The real history of exploring the ends of the earth is filled with enough disease, starvation, death, and cannibalism to give anyone pause.

Anyone looking to embrace a prop-heavy version of BTMOM will find the included ephemera a fountain of inspiration.  A good example of the book's reproduction documents is this letter from Ernest Shackleton to J. Scott Keltie, Secretary of the Royal Geographic Society.  Shackleton mentions his expedition has gained the backing of the War Office to such an extent that he can requisition Army personnel.  He also expects the Admiralty to approve an equal level of access. 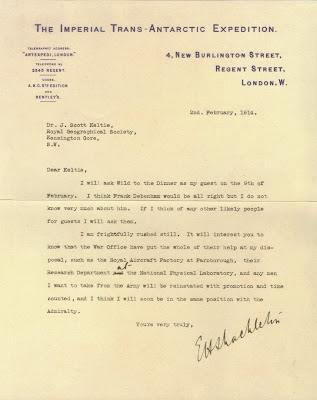 From a propmaking perspective the letter includes two interesting details.  The first is the letterhead itself.  It's an ideal historical reference for anyone, like me, looking to reproduce an authentic looking piece of Antarctic expedition ephemera.

The second is one of those great little details that a century of time has obliterated from the modern consciousness- the importance of the telegraph. The letterhead not only includes the expedition's dedicated address for telegrams, but what codebooks messages should use.  And what do you know, both of those books are available for free.  Google books has a copy of the ABC Telegraphic Code, Fifth Edition, while the Internet Archive stores Bentley's Complete Phrase Code.

For gamers this is a great opportunity to add some real interactivity and immersiveness into an adventure.  By the classic era of the Mythos the telephone was well on its way to replacing the telegraph as a means of communication, but telegrams were still used for a large proportion of long distance message traffic.  Having players decrypt a message using a code book is the kind of entertaining mini-game that reinforces the principles of investigation and provides an intellectually engaging experience.

I bought the self same book a couple of years back for exactly the reasons listed above. Unfortunately I still haven't found time to start Beyond the Mountains of Madness, I may have to plan a sabbatical to realise that ambition.
Regards HGA.

Cant wait to know more about this project!
Do you know more or less how much will be the deluxe and normal packs?
Thanks in advance (although I guess it is soon to speak about costs of something not yet done.)
I probably be interested pending on price , It will be a cool start to make a temathic box!

I plan to spend my twilight years in the nursing home playing RPGs. Actually, I'm hoping that my whole retirement will consist of acting like I'm a teenager again.

That's all based on having roughly 100 sponsors. I'm planning on being more aggressive about promoting the ATMOM set, so hopefully I can draw considerably more pledges than that.

Glad to hear that things are working out :)

Regarding the photos - could you glue a piece of paper or cardstock to the back of them to cover the brand name? That way, you could also print something of your own on the back - the address of the college photo lab, or an expedition logo, perhaps.

Several people pointed out that Kinkos uses unbranded paper by default. I don't have one locally, but there don't appear to be any issues with having them printed in the big city and then shipped here to the sticks. Heh.

Propnomicon, I’ve got to say I am impressed with your level of painstaking detail. The work on the Dornier Wal alone is great, no less on everything else. You are quite right about telegraphy in the 19th to mid-century, when telephones supplanted the medium. In a sense the telegraph was the email of its day and near instantaneous compared to snail mail. Once Marconi wireless telegraphy took off, there was nothing to hold it back. Just for nostalgia sake, I sent a cable from Asia Minor to the U.S. back 25 years ago and it wasn’t cheap, but at least I can say I did it.

Looks awesomne, and looking forward to hearing more, and going in for a deluxe pack!

This is shaping up very nicely. While on the subject of branded paper, I've pasted pictures to black construction paper like that used in old photo albums and then tore the edges to about 1/2" to make them look like they'd been removed from an album. I know that wouldn't be feasible for a big project, but for anyone doing something small it solves the branding problem.

This sounds all very exciting and I'm looking forward to ordering appendix pack. Do you have any estimate on when the project will go live?
And is payment via PayPal an option again?

An excellent suggestion. One of the alternative ideas I was looking as was having the photos produced as actual slides.

It's unfortunately turning into one of those "it's ready when it's ready" projects. I want to have the majority of the paper props completed before I launch it. Both creating and sourcing their production is taking more time than I expected.

Aye, PayPal will be an option for this one again.

We'll all have to move into the same nursing home, so your next $200 Kickstarter project after that can be the actual BTMOM campaign for us all to play.

It'll probably be a drag for the nursing staff, what with the players dying off at the same rate* as the characters, but the game will be unmatched for realism.

* I did not say "for the same cause." Though cardiac events when confronted with monsters are not implausible.