The Shaping of Cthulhu, Part Deux

Back in March Dave Kirkby started the long process of sculpting a custom statue of Cthulhu. The sculpt is now done and he's moving on to the final finishing.

For one brief period he had ears but they looked stupid so they went. The shape of the ridge around the head also got changed and I wanted a more bulbous look at the bottom of the back of his skull. The final big part was adding the wings which had been giving me the fear due to the size of the back but in the end I found them pretty easy to do. Once the wings got added it was just a case of adding the final details such as text on the base, some wrinkles, the ridges along the tentacles around the face, cleaning up the claws on the feet, filling deep holes that would be hard to cast plus a few other folds here and there. 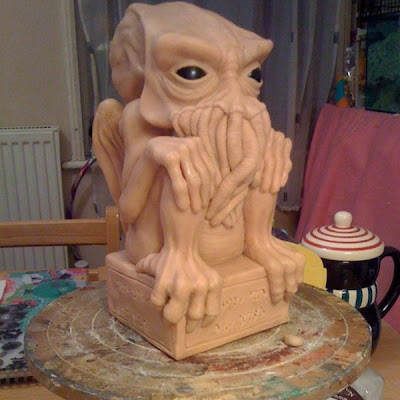 Thanks very much for the repeat mention, The little chap looks totally different at the moment as he's been sprayed, sanded and sprayed again a few times in the last couple of weeks. I'm about ready to start casting him and i'm looking at producing a bronze version and a stone version at the moment.

That’s a heck of a sculpt! It has that “anatomically correct look” that shows a lot of thought. I agree removing the ears was probably a good idea. With the pink base material (I know it will be painted later) the big ears would remind me of Cthulhu E. Neuman (What. me fhtagn?). Sorry, I know that a way too eldritch of an image for some of your readers. I like his post title “Oven Ready Cthulhu” which is rather enjoyable as well. Keep up the good work. I think this is going to be a world-class sculpture once you are finished.

Thanks very much fella. The ears had something of a trumpet shape to them similar to some types of squid, but they just looked too much like Shrek's ears to me.

Cthulhu E. Neuman? "What. me fhtagn?"