Back in December wats6831 took a break from the usual snacks for his tabletop RPG game and offered up his take on trail rations. Now he's returned with some dwarven trail food:


I made what I thought could go in a dwarven trail ration: garlic chicken livers, smoked and peppered cheese, spiced pork sausages, hard tack, dried vegetables, dried wild mushrooms. We tried to eat the livers wife just about threw up. I gagged one down with plenty of ale. Never again. We tried to eat the hard tack by soaking in hot tea. None of us could even get a bite. It took a couple hours of soaking in the sink to even get a fork in it.  Everything is made by us except the sausage and cheese. I picked the morels this spring. 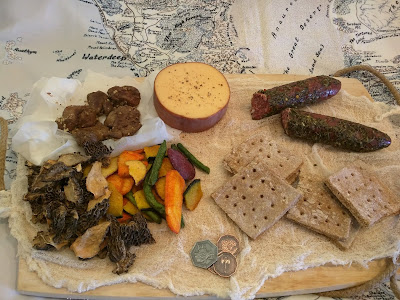 I find this really fascinating, since one of my other hobbies is vintage-style bushcraft. The only food I take major issue with is the chicken liver. Organ meats spoil incredibly quickly, so they're usually eaten immediately after slaughter or preserved by incorporating the fat-heavy meat into sausages.

Just as a thought experiment, I think there are some other foods our hearty little dwarven friends would be carrying. Given their homes in mountainous, cool climates (at least in the stereotypical fantasy world) wheat is probably a luxury grain that has to be imported.  Their locally produced staple grains are most likely oats, buckwheat, or rye.  That means dwarven travelers are presumably carrying sacks of groats or rye berries, all of which make a filling porridge. How about some oatcakes, the go-to food for generations of Irish and Scotts?  Or some buckwheat kasha? Dense, dark rye bread keeps for weeks after baking, and is effectively good indefinitely when dried, as in ruisreikäleipä.  And you can turn it into kvass, a refreshing alcoholic drink, in about 48 hours.

It's not too much of a stretch to assume that dwarves are experts in preserving food with salt.  Outside of metal ores and gems it's the most valuable underground commodity available, in demand by every race and culture.  In addition to vegetable pickles dwarves are likely to be carrying salted meats including ham, bacon, and salt pork.
Posted by Propnomicon at 3:00 AM

Man, I love this idea. I'm actually living in Finland and lot of the potential foods you suggested are pretty much everyday fare over here :D Particularly ruisreikäleipä which is straight up Finnish.

The discussion about trail food has been around for a while on Propnomicon and each post (and comments) is always interesting. Even today issues of portability, weight, and spoilage are still valid. The secondary issues of palatability and nutrition do take a back seat, but are still in the car. Over the years, things have improved, even in the 20th and early 21st century trail food got better.

Those of you who have eaten combat rations/MREs known that even they have evolved over the past 50 years considerably. Modern preserving techniques such as irradiation have become standard and freeze dried, which has been around since before WWII has also improved^. Taste and palatability of MREs has only really become on par with “real food” in the past couple of decades.

Here’s a link to a Roman army reenactor site that has two downloadable DOCs about making food for Roman army reenactors, that might help some RPG/LARPers as well as some historical reenactors as well. BTW rather than trying to make the favorite sauce, garum, modern Worchester sauce is a good sub and probably tastes about the same.
http://romanrecruit.weebly.com/food.html with links for the fortunatus-cookbook.doc and legion-rations.doc

Project Gutenberg has a free download of Marcus Gavius Apicius book, Cookery and Dining in Imperial Rome http://www.gutenberg.org/ebooks/29728 which might give you some game ideas.

^Although the technique has been around since 1906, Nestlé pioneered the commercial process to make their instant coffee in 1938, Nescafe. The process was also used in the US during WWII, ensuring that GIs had instant coffee available in the field with their rations.

Chicken livers are good (provided you like liver at ALL)provided you cook them VERY well done.

Liver is a dense thick meat that needs to be pretty scorched on the outside to getths inside done.

The harsher the weather the more techniques a culture develops to preserve food. The one Finnish food I just can't handle is the salty licorice.

As much as I love modern trail conveniences like freeze dried entrees there's something to be said for the old ways. The single most valuable food item I carry these days is a ziploc bag filled with all purpose flour. There's just so much you can do with it, and nothing beats fresh pita bread.

Have you ever had deli style chopped liver?

I've been here 3 years now and I have yet to fall in love with salmiakki...

Heh. It is a bit much for most non-Finns.

That is the WORST advice for cooking liver I've ever heard. You want liver to be cooked through evenly without over cooking. Over cook it and it gets grainy and tastes much more strongly over liver, metal, and blood. Scorching the outside and cooking very well done are excellent ways to get leathery strong tasting liver.

Liver needs to be first soaked in salted milk or water. To draw out some of the funkier flavors. And then cooked gently. Poaching is one way. Larger pieces can be slowly pan fried. Or Confit. My family traditionally roasts poultry livers with a small amount of fat at low heat for pate. Sous vide works well. Internal temperature should hit at least 145f and absolutely can't exceed 160f. Depending on how firm you want the texture and how litle pink. 160 is the USDA recommendation, and its a little high. Very firm, no pink, a little grainy. In my experience right around 150 works best for most applications, less grain but a bit of pink and softer. There's a reason that liver is so often the source of pates and sausages and its because those dishes are cooked very gently.

Which brings me to: Pate's are/were originally all about preserving meat and delicate organ meats. So while sauteed liver certainly wouldn't be road food, it could have been confit/potted. Confit chicken livers and Foie Gras are both deeply tradition in France, especially northern France. And the right sorts of pate wouldn't be great for long storage but it'd certainly be nice in the early parts of a trip. Rillettes would be a good choice. Essentially confit meat blended with fat and jarred/canned/potted for medium to long term storage. You smear it on bread. More rustic "farm house" style rillettes tend to be coarsely shredded like pulled pork.

Also cured/canned/pickled fish. Salt cod was and still is in many northern climates. Pickled Herring. Salted and smoked fish of any sorts. The Russians eat a heavily salted dried fish as a beer snack. Its pretty damn good. And as you eat it by smashing it on a table to soften, then pulling out the jerky light meat it would be pretty dwarven.