Caerban brings us a comparison of dragon teeth, in this case a Great Welsh Red and an Atlantic Afanc. In the high resolution shot at the link you can get a clearer view of the sculptural details. The contrast between the smooth enamel and the striated root of each tooth is really well done. 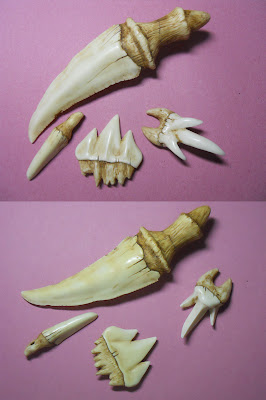 Very well done I like them. My only critique is that the large teeth look a little too much like a Dagger with a handle and guard because of the shape of the root.

Amazing work on those teeth! I've been playing around with translucent sculpey to make Deep Ones teeth,but they aren't at this level of awesomeness.

I also like really very much how the teeth came out! It´s really not easy to make teeth which look realistically, as enamel has a slightly translucient surface, and it doesn´t work to just cover a model with varnish to mimic this effect. I have also already sculpted several teeth of fantastic beings, including a quite large dragon tooth, which I want to cast anytime, and this method to use a mix of resin and marble flour filler sounds like a great idea.
But to play devil´s advocate once again (if you know my comments, you know my tendency of being a smartass), I also reallly don´t like the shape of the root, especially those of the big canine. Roots of teeth just don´t look like this. I surely don´t exaggerate when I say that I am quite familiar with tooth morphology and even histology, not only with those of humans, but also with those of animals, including many fossil species. The upper part of the tooth looks really quite good, and I really like the fine serrations at the edges, similar to those of theropods, monitors and other carnivorous reptiles, and the grooves at the sides as well, but the root makes just no sense. Of course it is meant to come from a fantastic creature, but I think (well, I´m somewhat conservative about this) that props look just better if they make sense, no matter if they depict such things like teeth or armour, weapons or other stuff. When I sculpted my dragon tooth I made a lot of research about different kinds of teeth, and it is really very hard to get enough references for things like surface structures of apical anatomy of certain animal teeth. And it doesn´t make things easier that certain animals which looks superficially similarly, have fundemantal differences in tooth anatomy. For example, all modern reptiles have rootless teeth, which are only fused (of course not in the mobile venom teeth of snakes) at their base with the jawbone. So, what you can see of the tooth on the bare skull, is basically the whole tooh, and it´s more or less the same in fish. The only exceptions among modern reptiles are crocodylians, which have long and strong roots, which are positioned in sockets of the jawbone. This condition is called thecodont. There were also many other prehistoric reptiles which had thekodont teeth, like dinosaurs, plesiosaurs and several other lineages. And mammals are thecodont as well. Of course there is a lot of variation in root shape, but there are some quite common standard shapes, especially in canine-like teeth, which don´t differ much among all mammals and thecodont reptiles. The main difference is the apical area, which can be either more pointed and with a small Foramen apicale, if the teeth have terminated growth as in many mammals, or if they grow continuously or get replaced, like the tusks of boars, narwhales, elephants and many more, or the teeth of crocodiles as well. In this cases the apical part is much wider and more funnel-shaped.