In the early months of 1925 people around the globe began to have a series of strange and terrifying dreams. These disturbing experiences featured a monstrous being of inhuman form seemingly rising from the depths of the sea. What makes the shared dream occurrence even more puzzling is that it became increasingly widespread until suddenly coming to an end on April 2nd.

The indefatigable Jason McKittrick brings us this Cthulhu idol in honor of the occasion. 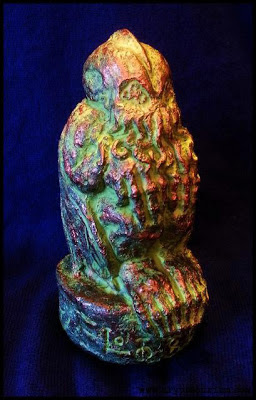 Like the colours on this one; almost like those on 3D pictures, suggesting that there's more to be seen of this than human eyes can pick up.