The Voice of the Miskatonic Valley

At the same time I was putting together the vintage radio tutorial from earlier this week Jeff Devine just happened to be working on a scenario involving Arkham's first radio station. He was kind enough to send over this business card for it.

In the real world the WRKM call letters were unassigned until around 1960, when they went to a licensee on 1350 AM in Carthage, Tennessee. After getting an extension on their tower construction permit they appear to have gone on the air in 1963. That would suggest the owners of the Arkham station either went out of business or asked for new call letters sometime before that period. 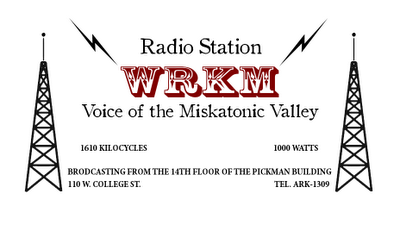 The loss of the tower and facility was probably due to the “terrible incident” in 1959, which cost Arkham their radio tower and several people’s sanity. You see those towers receive as well as transmit and that special crystal setup they rigged up that they got from the Tillinghast estate, might have been the root of the problem. Thank heavens it never was switched over to broadcast. Watch out when you buy at garage sales, folks.

I generally listened to WKRP Cincinnati myself; at least the insanity there was more pedestrian. My favorite was the Thanksgiving episode. “Nobody told me that turkeys can’t fly”. You know the one.

Actually, the importance of radio in the 1920s cannot be overstated especially in rural areas and small towns. As an entertainment medium, radio was instant and accessible. Everybody strove to afford a radio although the bottom of the line models was a bit more than a week’s pay for a working class family and paid on time at that.

I have one of these type pseudo-replica styled radios, http://www.polyvore.com/1932_nostalgic_old_style_cathedral/thing?id=18808090 and I just picked up a 1939 Silvertone radio (i think its the 6362 model - http://sfhobbies.com/sfhobbies/radio/images/silvertone/sil_6362_a.jpg), and im amazed by how awesome the Silvertone sounds (especially when compared to the pseudo-replica). They actually look pretty good with the replica sitting on top of the silvertone.

Its going to be interesting figuring out how to broadcast the top 40 of 1925 interspersed with fake news broadcasts on a CD at games and events.

You're right about the impact of radio. We take having instant access to entertainment and information for granted. In the 1920's it was revolutionary.

Are you limited to CDs for playback?

Unless I can figure out a way to broadcast an AM signal into the silvertone..... I suppose i could rewire the pseudo-replica to run tapes or an mp3 player without too much difficulty *shrugs* just haven't looked into it, but now that you mention/imply it......

@ Alex, Back in the early 1980s there was a device called "Mr Microphone" which was a hand held device to broadcast onto a car radio or house radio as a prank or party novelty. You might try the web or eBay to find one or its equivalent. You could then remotely (but not too remote) broadcast your vintage program into the radio.