Brandon Zimmerman brings us this unusual item from the infamous Hodge collection.

Recently his descendants have recovered a box of Driesback's belongings from his days at Danvers. Along with a multitude of records, photographs, and drawings, five sculptures were discovered - this idol is one of them. This idol is listed in Driesback's correspondence as being "Idol number 1," apparently named by Hodge as "The Shrine of Bothria."

Based off of original drawings and transcriptions of recorded sessions between Hodge and Driesback this idol is believed to be authentic. Hodge believed wholeheartedly that this shrine would protect him from his enemies citing the "Elder Sign," as Hodge calls it (the symbol carved into the back of the shrine), as the main source of its protective power. Hodge also states that the shrine is modeled after a creature called a "Shuggoth." And that it would protect him from "the Deep Ones and The Dreamer. Yet its protection comes at a price."

Several human teeth and dried blood were found along with this idol. In addition photographs of Hodge with numerous self-inflicted wounds, including missing teeth, wrist-wounds, bite-marks and ritualistic cuts on his legs and arms, along with the remains of several small animals have led scholars to believe that Hodge thought the only way to unlock the idol's protective power was to make a sacrificial offer to it of human or animal blood and flesh. 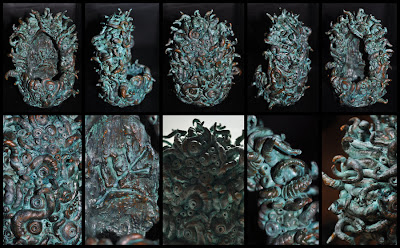