The Black and the White

B. de Corbin brings us a pair of artifacts dating back to the French revolution. The craftsmanship of the so-called Montathos Bracelets is outstanding, but it's the history behind them I find truly intriguing.

According to the story I’ve heard, the French metal smith and mystic Pierre Montathos (1753 - 1793) received two mysterious stones from that strangest of all characters, the Compte de St. Germaine, whose biography weaves it’s way in and out of the historical record for well over two hundred years. Some claim that St. Germaine was a pretender and a charlatan who preyed on the naïve occult longings of the French aristocracy, while others believe he was exactly what he claimed to be - an Alchemist who had discovered the secret elixir of immortality during his wandering in the Far East.

Whatever the true truth may be, we know that the Compte de St. Germaine moved, for a time, amongst the very highest levels of French society… and also, the very lowest. Somewhere between the two he ran into Pierre, they became friends and carousing buddies, and the Compte gave the two stones to Montathos, instructing him in their use.

According to St. Germaine, which we have from the fragments of Montathos’ notebooks which survived the Terror, the two stones were a matched set carved from the last two known hippogriff eggs (this explains why the hippogriff, if it ever existed, is currently extinct). One was a black egg, the other a white. Together, they form a matched pair, which, when brought together and arranged in a certain manner so as to form an Alchemical Conjunction, give the one who can use them all the powers that lie between dark and light - in other words, infinite power. 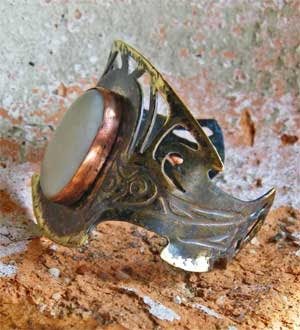 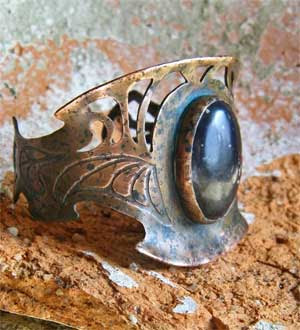 As a French reader, I would like to correct one point. ^^

The proper name in French of the mysterious adventurer-alchemist is "Comte de St Germain".
"Compte" in French is only number related whereas in English the spelling is the same for the nobility title and for the verb.
Germaine is the feminine form of Germain, thus "Saint Germaine" does not make sense in French and should be either "Sainte Germaine" or "Saint Germain".
A truly intriguing character though...

I was also amused to find out there is a Saint Peter of Mount Athos : Saint Pierre du Mont Athos in French.

My thanks for the usage information.

Actually, I have to comment as well. From a stylistic view, the bracelets just don’t reflect the work styles of the 1790s: Rococo classical revival they aren’t. Nor are they even Egyptian, Etruscan or anything else revival that is even remotely correct for a hundred fifty year span before or after the 1790s. In fact, they are in a style that arose in the 1970s and perfectly reflect that era. As good as the back story is on these pieces, it just don’t jive any more than if they were Art Deco or Eames Era . Believability is hurt in the back story when there are elements that are completely anomalous and unexplained. Now you could claim the stones were taken from a pair of 200 year old bracelets and reset and that would work well “The gold bracelets were stolen from a tomb by thieves and the precious metal melted down, the stones passed to a powerful thaumaturge, who had studied under Aleister Crowley, and had them set in the Age of Aquarius” – that’s heavy man!