The gifted Brandon Zimmerman brings us this nicely done Cthulhu amulet. I really like the texture work along the upper body. It brings to mind the pitting found in meteorites or chunks of bog iron.

This amulet was uncovered in 2009 outside the small town of Santa Margalida, on the island of Majorca, Spain. This area, known as the Son Real Necropolis, is an 800-square-foot mass gravesite that dates from the 7th to the 4th century BC. It is located on the small rocky coastal headland of Punta Fenicis and served as a mass burial site where the remains of over three hundred people, including woman and children, were found. 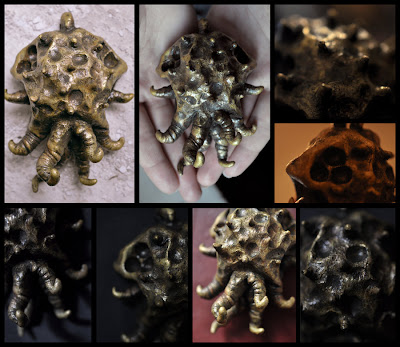 Now that’s really alien. The sponge-like head covered in areas that might be eyes or even more esoteric organs. The background information is pretty nice too. You might pilfer a few images from 20s dig books to get generic grave diagrams to perk up the presentation.