"The Shadow Out of Time" Expedition Gear

The new order of patches and pins based on Lovecraft's "The Shadow Out of Time" have already arrived, but I'm waiting on a shipment of mailers that are scheduled for delivery on Thursday. If the postal gods smile upon me everything will be on sale this weekend. 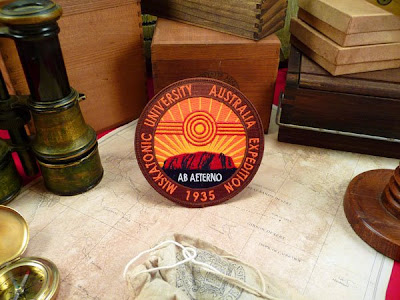 The sets will include an embroidered patch and brass lapel pin with the Australian expedition's "Ab Aeterno" logo along with a postcard and the usual extras for $19.99. 100 will be available, and once half are sold I'll have the patches and pins available individually, for $5.99 and $9.99 respectively. 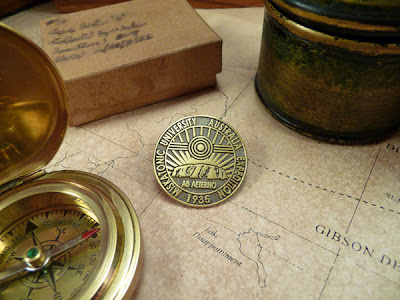 As with the ATMOM gear I'll be taking orders all weekend and then mailing out the packages first thing Monday morning. In case you wanted to get a head start on your "Shadow Out of Time" prop collection take a look directly below this post. Lovecraft's story includes almost all the information needed to fill out the passage tickets for the entire Miskatonic expedition, including all the members:

Professor William Dyer of the college's geology department - leader of the Miskatonic Antarctic Expedition Of 1930-31 - Ferdinand C. Ashley of the department of ancient history, and Tyler M. Freeborn of the department of anthropology - together with my son Wingate - accompanied me...My correspondent, Mackenzie, came to Arkham early in 1935 and assisted in our final preparations.

That last would be Robert B.F. Mackenzie, the Australian that originally uncovered the mysterious desert ruins. As for the departure itself:

Sailing from Boston aboard the wheezy Lexington on March 28, 1935, we had a leisurely trip across the Atlantic and Mediterranean, through the Suez Canal, down the Red Sea, and across the Indian Ocean to our goal.

There's a good chance Lovecraft based the ship in his story on the actual S. S. Lexington of the Colonial Line, which served Boston, New York, Providence, and New Bedford during the appropriate time frame.
Posted by Propnomicon at 7:51 AM

Labels: The Shadow Out Of Time

Love the emblem. It is simple and stands out at a distance. A lot of folk can get too busy with things like that. Also the choice of warm colours is good in contrast to general cthulhury.

Thank you for the kind words. From an art standpoint I think the Australian expedition logo is the best thing I've done. The color scheme and the iconography really mesh well.

In case anyone was curious what the various elements are for:

"The rayed sun motif of the Miskatonic University seal rises from from behind the deep-red stone of Ayer's Rock, while above them are two stylized Aboriginal glyphs- the horizontal parallel lines symbolizing a journey surmounted by the concentric circles marking a destination or campsite. Below that, the latin phrase "Ab Aeterno" or "From the beginning of time", the expedition's motto."

I caught ayers rock of course, thanks for the translation of the latin!

I'm not sure if that's period. Heh.

I really do like your logo design on this and being an Aussie I'm pretty keen to get a set.