Artist Rebecca Kemp Don Simpson brings us this recreation of "The Curwin Letter" from Lovecraft's "The Case of Charles Dexter Ward".

My version of a letter that plays an important part in H. P. Lovecraft's horror novel, The Case of Charles Dexter Ward.

The text is given in the story, in as close to 17th century style as Lovecraft could manage on a typewriter, and I have put it into a 17th century handwriting, using a computer font I created that is based mostly on the handwriting of William Bradford, the governor of Plymouth Colony. After setting the text, a list of search-and-replace items were required, as there are several ligated letters (ct, ck,ff, etc.), some letters that are written differently when at the end of a word (s, e, etc,), and several abbreviations ("the" looks like a "Y" with an "e" over it, "Mister" like an "M" with a squiggly tail) in this style. If I had more advanced font software (and later program versions), this could all be done automatically.... 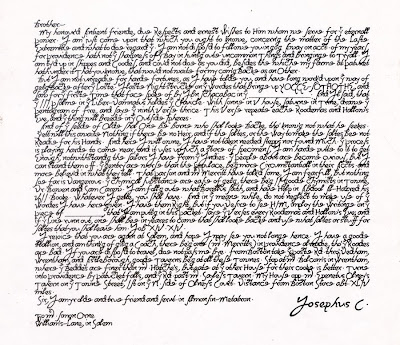 Just click through on the link above to download the high resolution version of the letter from Mr. Simpson's DeviantArt page. Once printed and aged it should be quite the effective prop.

Update: Earlier, this work had been credited to Rebecca Kemp because I found it in her "Pickman's Model" gallery at DeviantArt here. That appears to be a aggregator site for Lovecraftian art, but there is no mention of Mr. Simpson on the page and the posting text speaks of creating the work in the first person. Draw from that what conclusions you will.

I apologize to Mr. Simpson for the oversight and would like to thank R.S. Bohn for bringing the situation to my attention.
Posted by Propnomicon at 3:00 AM

I'm always a bit non-plussed at supposedly "handwritten" letters that are so neatly double-justified.

Calligraphed documents being double-justified wouldn't be so surprising, because one rather expects the necessary pre-planning there -- stretching out otherwise short lines, so that one isn't left using, say, curlicues to fill the awkward empty spaces at the ends.

But in a handwritten letter with such incredibly even line-lengths, I would expect to see many more hyphenations, even quite a few of them mid-syllable, as the pen ran out of space.

Very cool! Would love to get my hands on that font, too.

Umm... I follow Don Simpson on DA, and he claims to have created this piece:

I'm not sure what's going on here... Am I somehow mistaken?

Thank you for pointing that out.

I'm glad it's been changed. I'm sure it's Don's, and as a long-time follower of his work, I'd like to see him get the credit he very much deserves. I'm not sure what is going on with Kemp -- I'm hoping this is an oversight on her part and not something much worse.

And having said all that: keep up the good work on your part! One of my fave blogs.

Thank you for the kind words. Could you post or email Mr. Simpson's Twitter address? I tried searching for it but didn't find anything.

By the look of it, "Pickmans Model" is a group page of artists on Deviant art and Rebecca Kemp only moderates it (I don't think she posted that particular piece of art). I'd blame Deviant Arts attribution system for the mix up.

I don't think he Tweets. I did a search myself, but came up with nothing as well. No FB, either, from what I recall. He was going to open an Etsy shop this past spring, but that never materialized, which is a bummer.

Hey, when you're in your 70s, you just do exactly what you wanna do and nothing else, I guess. :)

Don Simpson here.
Yes, the Curwin Letter and Pilgrim font are mine. I don't Tweet, Warble, or Blatt, and even my LiveJournal and Facebook accounts exist just so I can follow my friends. I do keep up my deviantART account, under the name DonSimpson. I am donsimpson on AOL mail, and check that regularly; on Gmail I am donsimpson00000 (5 zeros), but I check that less often. The "Pickman's Model" Lovecraft group page on deviantART requires members of the group to sign in as the owner and post their art. I should go put my name on that piece to prevent further problems. I was _considering_ an Etsy shop, but decided I am not ready yet. Raven is correct about the neat justification of the right edge being unrealistic, though several of Governor Bradford's quill-pen-written documents come extremely close to perfect double justification, and most are only very slightly ragged on the right; and he used no hyphenations. And, finally, in my 70s I do try to do what I want and nothing else, but I haven't been able to make that work. :)