Bag Of Cthulhu: The Reckoning

So, my long awaited Bag of Cthulhu from Fantasy Flight Games

finally arrived from Amazon. If you remember, I was a bit upset by the products much delayed release, but now that I actually have it in my hands I'm pretty happy.

First, the good. It's Cthulhu. Lots and lots of Cthulhu. A veritable army of Cthulhu. You don't really appreciate just how freakin' many Cthulhu figures this includes until you see them all lined up outside of the package. 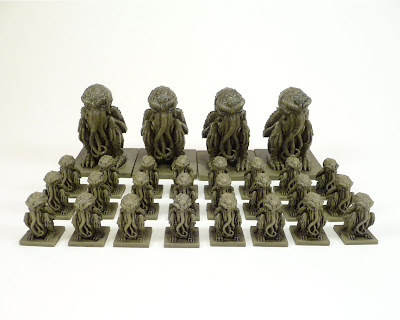 You get 24 of the 20mm high figures and six of the larger 50mm ones. Two of the larger ones are missing from this picture because I used them for...experimental purposes. More about that later.

The detail level of the sculpt is quite nice, particularly for what is essentially a game piece. There's some minor flash and mold lines, but those could be cleaned up with a small file and a bit of sandpaper if you were so inclined. The plastic is a terrible, muddy greenish-grey with just a single black wash to bring out the details: 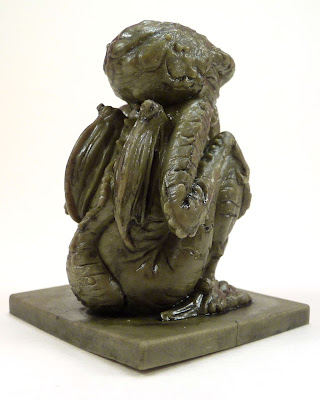 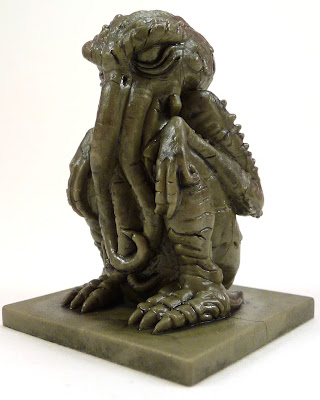 Now, the bad. Everything that Scott said in a comment on my earlier post is dead on:

"I've gotten mine from eBay ($11.99 + $3 s/h) and the detail is marvelous--the pictures do not lie. Finishing is a bit...erratic...as some have quite prominent mold lines and sprue marks and some look pristine with no indication that it isn't an original piece. I've come up with a few crafty ideas, but one thing to note is that they are formed of rather soft plastic, so they would not make a good keychain without some sort of reinforcement. Perhaps being embedded in a polyester resin..."

If you're planning on using these figures for anything other than static display this plastic is a nightmare. It's soft, easily worn, and almost impossible to get paint to stick to. I scrubbed down one of the 50mm figures with hot soapy water and a toothbrush trying to get any traces of sealant or mold release off. Despite that, acrylic paint just wouldn't adhere to it. The slightest pressure would cause even a thin layer of pigment to flake right off. When I switched to enamel paints the results were a lot better, but there was still some flaking along the raised areas. Here's one of the repainted figures: 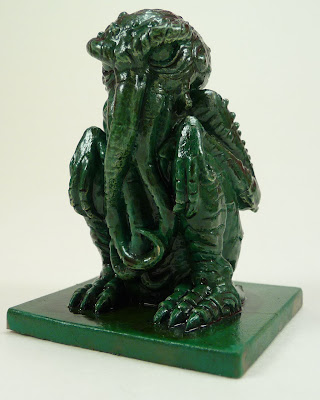 The finish is Kelly Green enamel with a light drybrushing of white and a final dip coat of golden oak oil stain. It took a couple of days to dry, but once it did the finish was like glass.

That said, as a collection of game pieces the "Bag of Cthulhu" is a great deal. You get a ton of useful figures for a bargain basement price. I'm disappointed that the plastic FFG used short circuits my plans to recycle them in other projects, but, realistically, that's not a valid criticism. It's like giving a romance novel a bad review because it's not the gritty police procedural you were in the mood for. There's still a lot you can do with them outside their intended use, but these are, first and foremost, game counters. At that, they're exceptional.
Posted by Propnomicon at 3:00 AM

When I first saw that top picture I thought "Cool. A Cthulhu chess set" :)

Almost sounds like they're made of hard vinyl or something -- notoriously difficult to paint because of the constant off-gassing and bleeding of the oils.

Couple suggestions: Try priming it first, it might help provide something for the paint to adhere to. Primer generally sticks better to plastic than paint. Not always, though.

There's a spray paint out there designed to work with plastics, especially the hard-to-paint kind. I forget what it's called, but it's made by one of the major spray paint manufacturers -- Krylon, I think. You could do an undercoat of that and then hit it with your regular paints.

Finally, there's a Japanese paint out there that's used on vinyl toys. HIGHLY toxic, not too cheap, but it'll stick to anything and isn't screwed up by the off gassing. Of course, at the moment, I can't remember what it's called, but I can find out for you.

If it *is* vinyl, Krylon (among others) makes an aerosol Vinyl Dye that is the same price as regular spray paint. Takes a little (not much) longer to dry because it actually is a dye that absorbs. Case modders use it a lot on computers and game consoles as it will absolutely not flake off (being a dye). It would act as an excellent primer as it would retain a lot more detail than an actual coat of primer (even the plastic primer).

I hadn't thought of that because my fear was that the figures were polypropylene, which seems to be becoming more and more popular in the production of cheap toys--but vinyl makes a lot more sense considering the properties of the figure I tape to my monitor at work every night...

Off to Lowe's and Wallyworld to see who's stocking vinyl dye this week...

Er... Just for the record, it might not be vinyl, so don't go doing anything that might ruin the toy -- if made out of polypropylene -- without testing the figure first. I don't have any of these, and haven't had a chance to take a close look at them.

Well, as Props said, there are 24 of the little buggers--so there's room for a little experimentation...