"At the Mountains of Madness" Expedition Gear

Those questions may never be answered, but now you can own a small piece of that ill-fated expedition's history. 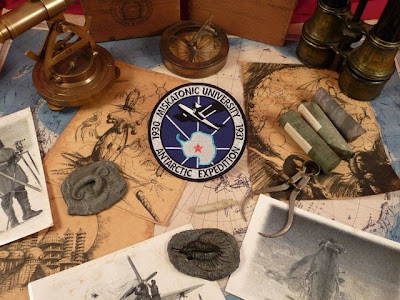 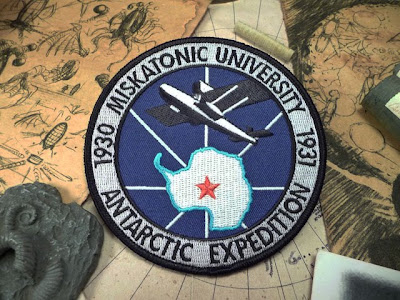 This 4" (10 cm) patch is embroidered on a tough cotton twill backing that will last for years of use, and the heat-sensitive adhesive makes it easy to iron it on to the garment of your choice.

The "Wings Over Antarctica" logo is as historically accurate as possible. The deco-influenced design features a stylized Dornier Wal (or "Whale"), the aircraft actually used by the expedition in the story. The silhouette of Antarctica is correct for 1930, before the true boundaries of the ice floes had been mapped, and the font used was first available commercially in 1928. Reader's of the story should also appreciate the symbolism of using a five-pointed star to mark the expedition's ultimate destination. 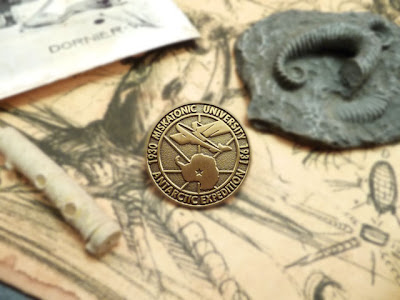 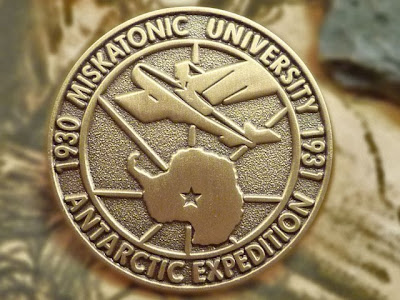 This handsome reproduction of the "Wings Over Antarctica" logo is 1" (2.5 cm) in diameter. Constructed of solid brass with an antiqued finish and a butterfly clasp backing.

Both the patch and pin are short run, fan-based project based on H. P. Lovecraft's classic story "At the Mountains of Madness". There are a limited number available. Each patch is $5.95, pins are $8.95, and a set including one of each is available for $13.95. Shipping is calculated when you checkout using PayPal and should run around $2.00 to $2.50 for US orders and approximately $1 higher for international orders. You'll receive a prompt notification when your package has shipped, usually in less than 24 hours.

If you would like to purchase multiple patches or pins please contact me at propnomicon@gmail.com about discounts for bulk purchases and shipping. Please feel free to email me if you have any other questions or concerns.


Update: Sold out!
Posted by Propnomicon at 5:15 PM

Great work! I am sure these new items will be very popular in the Mythos community.

Hooray! I didn't miss this batch. Hopefully you'll have another run of the Australian expedition patches and pins at some point :)

Consider this an "official" second.

Now if only we could vote ;>

I'd just like so sign in and say that my package arrived safely (all the way to Norway) and the expedition gear is excellent.