The Fakest of Fake Vampire Killing Kits Sells. Or Does It?

The long saga of the worlds fakest vampire killing kit entered a new era yesterday. Earlier this month I pointed out that it was once again up for sale. Yesterday it hit the auction block and sold...maybe.

The item listing on Ebay is very strange. According to the bid history a single person bid twelve times and ended up winning with a final bid of $1,100. 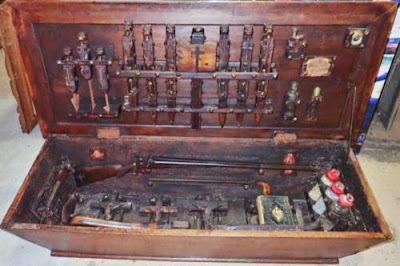 What makes that even more unusual is that Sterling Associates had another vampire killing kit up for bid at exactly the same time. This one is pretty nice, in contrast to the sloppy work on the other one. Surprisingly enough, the exact same bidder made exactly the same number of bids and won with exactly the same high bid of $1,100. 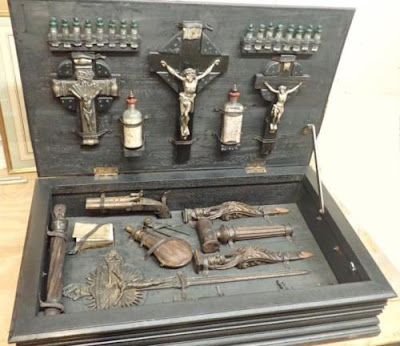 The weird bid pattern may be a normal part of auctions taking bids from Ebay and a live venue at the same time. That said, I suspect we'll be seeing both of these kits again.

Might want to get your facts straight...the one in 1st photo was sold at Sterling and NOT on Ebay,and 1 bidder did not bid 12 times...how do I know this,because its sitting in my Living Room.Yes,of course its a "fake" but its housed in a coffin size chest that makes a beautiful coffee table,which was worth the paid price,and if you look closer at long barrel Pistol in back on bottom,that also is worth close to the price of the entire kit.This same kit was sold by Sterling years earlier for $9,000...so all in all,fake or not,it was a deal..!