Over the years we've featured hundreds of Cthulhu idols here on Propnomicon.  Of those, only a handful have been mass produced.  The vast majority are short run projects from individual artists consisting of, at most, a few dozen castings.

That's one of the reasons this idol is so unusual. It was just released as the centerpiece of the "Cthulhu: The Ancient One Tribute Box", a book/gift set by author Steve Mockus.  It's produced by Chronicle Books, a publishing house that specializes in niche tchotchkes. You've probably seen dozens of their products in the browsing racks at your local bookstore. 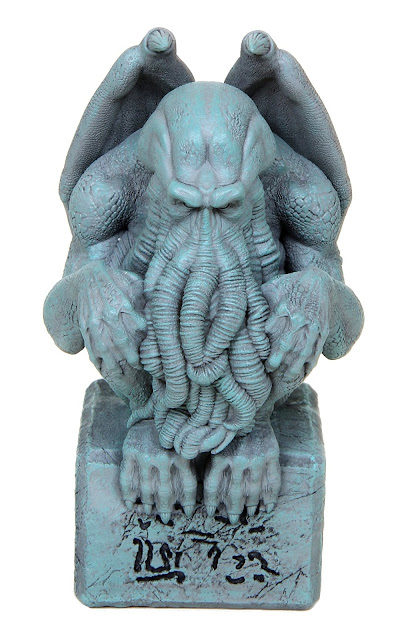 Todd von Bronkhorst pre-ordered the set over a year ago (!) and received his on the day of release.  He was kind enough to send over his impressions and some pictures that give truer look at the idol's size and finish.

It's solid resin and is 4.5" tall. The inside packaging (which holds the book) also makes a nice display stand. I included a Bic lighter in some photos to show scale and a truer sense of the color than what you see on Amazon.

The book included is nothing much to get excited about -- essentially a collection of trivia for someone who has never read Lovecraft and needs a primer on Cthulhu and its place in pop culture, etc. -- but the statue has some heft to it and is quite a nice sculpt for twelve bucks.  (For the price, I'm tempted to buy a second and use them as bookends.)

I have to agree.  It's an impressive sculpt, and a steal at $12, particularly if you can get free shipping through Amazon Prime. 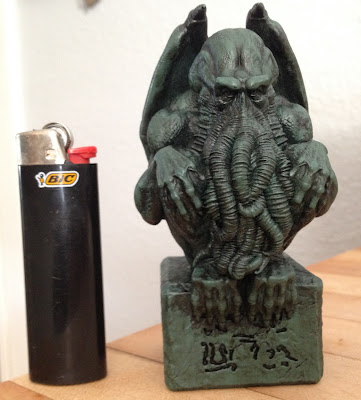 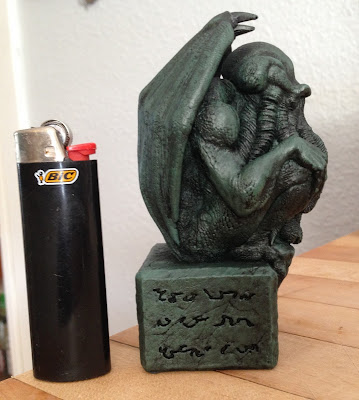 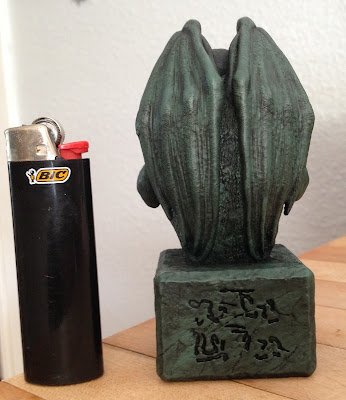 Ordered mine right away. Like he says " A Cthulhu idol for 12 bucks?" I'm down.

Just got mine today. REALLY fast delivery through Amazon. Like he said the booklet is nothing you don't already know about Cthulhu if you spend anytime looking at PROPNOMICON but it's a good intro for someone "on the fence" about reading Lovecraft. But MAN, The Idol is a STEAL at like $12.00! It's not only gorgeous but has allot of heft for it's size. I highly recommend.