Gage Prentiss brings us this Maori amulet of protection from the "fish men".  Sadly, it wasn't enough to protect the sanity of it's unfortunate owner.


The Jade talisman was confiscated from a young deckhand named Jameson at his admission to the Sussex Lunatic Asylum in 1848. He had been commissioned on the Clipper ship, Cricket, during its trade circuit to New Zealand and Australia. Jameson had purchased the amulet from a Maori merchant who traded in jade. The Merchant had said it would protect him from the Ika Tane, or Fish Men, that lived in cities off the coast. Jameson was found a week later aboard the Cricket, near death from exposure, hiding in a large coil of rope. All other hands had vanished. Jameson had claimed that the Ika Tane had "calmed the sea with frog song" and "taken everyone on board under the waves." He claimed that the amulet had saved his life, and was loath to be separated from it. Investigators were at a lost to piece together what happened on the Cricket. There was no sign of violence, or theft from the valuable cargo. The mysterious amulet passed hands many times, and over the years, others like it have surfaced all over the world. 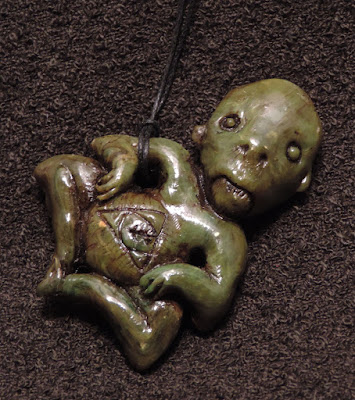 It’s nice to see Mythos prop making permeating across cultural memes. I really like how this gaff mimics New Zealand jade figures in both shape and color. For a comparison, go to the below link. Also of interest on the figure at this site is the braided cord and check out the toggle keeper finishing out the necklace.

And the Maori themselves have long used interesting symbols in their authentic jade jewelry, for instance compare our host's preferred version of the Yellow Sign [cf. pic of original book cover] to this jade necklace....