Gearing Up for "The Expanse"

I'm a big fan of  "The Expanse" series of novels. The stories are being adapted into a television series by the SyFy channel, but don't hold that against them.  The first two novels are outstanding semi-hard science fiction, and the second features one of the best portrayals of the thought processes of a power armored soldier ever written.  Sadly, the overall quality steadily declines as the series progresses.

Concept artist Rob Cavanna was commissioned by a fan to design a costume for Amos Burton, a hard-assed engineer aboard the corvette "Rocinante".  That included not only basic clothing and gear, but a selection of custom designed patches.  The results are pretty awesome, and you really need to click through to see the high resolution image. 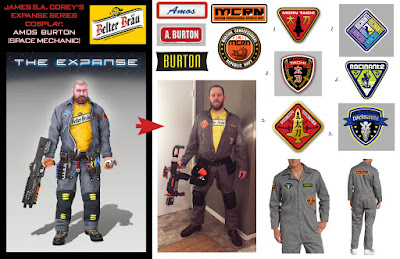 I've loved this kind of detail oriented, lived-in future since "Alien".   That's the first media property I can think of where logos and signage were an important part of the production design.  Mike Jenkins has recreated dozens of examples over at his blog.  Browse around and you'll find designs from the "Alien" series, "Blade Runner", "Firefly", and more.
Posted by Propnomicon at 3:00 AM

Thanks for the name-drop :)

Coincidentally, I just started looking up SyFy's Expanse, and trying to spot interesting logos and patches and ads & background stuff. I do love fictional graphic designs.

Just finished my marathon research project into The Hunt for Red October, and a 10th anniversary review of V for Vendetta, too.

That's some really cool concept art by Cavanna; it reminds me of the mechanics and engineers that were designed for Avatar.

I never cared for the tidy, sterile, plastic environments in space depicted in most films. Humans will always make the living areas their own and besides the plastic cubes just depressing and unnatural in the long run. Nobody is going to spend months, no less years in a dead and dehumanized environment such as in the film 2001 (1968) which was the standard view of space flight and travel.

I expect folks in deep space travel are going to have a lot of human touches in their areas such as wall hangings, carpets, plants, art, pets and interesting wall paint. Maybe not quite as exuberant as a steampunk lounge, with lots of architectural work and heavy wood framed upholstered furniture, but still a quirky place of their own. Then again Professor Cavour’s space sphere from the film First Men in the Moon (1964) and the luxurious projectile From The Earth to the Moon (1958) are a heck of a way to travel in style.

On the side of lived-in and grunge are a few films of interest such as the often overlooked is the 70s film Silent Running (1972), which is a good deal different from the adventure films of today. Although not grungy, it has a reasonably lived in look. Outland (1981) was basically a space version of the western classic High Noon, with lots of lived-in grunge of an industrial mining complex in need of a sheriff. District 9 (2009) is a film where the space men came to us, but there’s lot of lived-in grudge, interesting technology and genetics.

You can get into ultragrunge too such as Soilent Green (1973) which comes to mind also, but that might prove to be a little too grungy and very little prop bling of interest. Post apocalypse goodies abound in films like A Boy and His Dog (1975), Mad Max (1979), and Road Warrior (1981) beg for a lot of prop work and cosplay. Then again none of these films take place in space. Oh well.

I should also add that this reminds me of Alien in the best way, and particularly of Ron Cobb's graphic design work on the patches and insignia.