I was surprised to wake up this morning to learn my auction for a "Mummified Human Heart Occult Artifact Gaff Prop" had been pulled for violating Ebay's policy against "trafficking in human body parts".  Here's where the trouble started...

One of the blackest of black magics is the binding of a human spirit.   In occult circles the abhorrent rituals required to place a soul under the control of a necromancer are rightly feared, both for their immediate and long term consequences.   More often than not the practitioner who dares to experiment with such matters finds their own spirit at risk.

From a private collection we present to you a talisman used for that very purpose, crafted from the heart of a suicide.  Traditionally, those who took their own lives were viewed as a spiritual risk to the community as a whole.  Their restless souls could trouble a town or village for years.  In most cases they were mere annoyances, but particularly bitter or angry ones could be terrifying, lashing out at anyone nearby and slowly growing more powerful over time.  Preventing such occurrences required burying the heart of a suicide at a crossroads.

Unfortunately, not everyone viewed a restless spirit as a liability.  For some they were a precious resource with significant magical power.

The heart used in this binding talisman shows the characteristic distortion of one placed inside a box while fresh.  The moist tissue molded to one corner of the container and then dried out, displaying a distinctive ridge.  At some point the heart was recovered from it's resting place at the intersection of two roads and the spirit ritually bound.  During the ceremony iron spikes were nailed into the desiccated flesh, allowing the necromancer to trap the soul within.  Only through service to it's new master could the victim gain some measure of freedom and avoid the torments of punishment.

The heart is pierced by 30 iron nails.  Traditionally, the ritual of binding used one nail for each year of the subject's life.  The tissue is desiccated, akin to dried beef jerky, and the surface shows signs of having been treated with a mixture of wax and essential oils during it's creation.  The faint odor of myrrh and camphor is present.  No definitive date of origin for the heart is available, but the cut iron nails are consistent with the late 18th and 19th centuries.

Inside the box is a small cloth pouch containing tools for the heart's ritual use. A binding amulet of carved agate confers control of the spirit and compels them to obey the owner's commands.  The harrowing blade, made of an unknown animal's tooth attached with molten pitch to a carved antler, is used to torment the recalcitrant spirit.  In extreme cases of rebellion it may be necessary to use one of the included iron nails, hammering it into the heart and inflicting severe distress on the bound soul, to force compliance.

The box is maple with a finish of dark red paint and shows considerable signs of wear.  It was used to hold the heart and associated implements when they were purchased by the current owner.  Given the known provenance of the artifact it's likely the box was added sometime in the 1920s or 30s as a convenient container.

A word of caution.  For those that believe in magical forces this is the very definition of black magic.  Enslaving a human soul is one of the most terrible practices available to the left hand path, and the spiritual consequences of asserting domination of the bound spirit are dire.  You do so at your own risk.

A bit overwrought, perhaps, but I thought the above was a pretty well done narrative for a high end prop.  Sadly, Ebay didn't share my opinion.  They were convinced I was trying to sell a real human heart of dubious origin.  That was a "WTF" moment, but the resulting conversation with Ebay's customer service was even more surreal.  Despite the prominent use of the words "gaff" and "prop" in the auction's title, and the following disclaimer...


This prop specimen was constructed using traditional sideshow gaff techniques, but to modern presentation standards.   The piece was designed to stand up to extremely close examination, as the close-up photographs demonstrate.  As a collector myself, one of my pet peeves are gaffs that are photographed in dim lighting or without detail shots of the creature's anatomy.  Sadly, many of them don't look nearly as well-made in regular viewing conditions.   That's why I try to provide as many brightly lit, high resolution pictures as possible.


...I could not persuade Ebay that this wasn't an actual human heart and was threatened with complete bannination if I tried to re-list it.  I guess that's a compliment.

Now for the post I originally intended to be using today:

After over a year of fiddling about, the Hellbound Heart project is finally finished.. 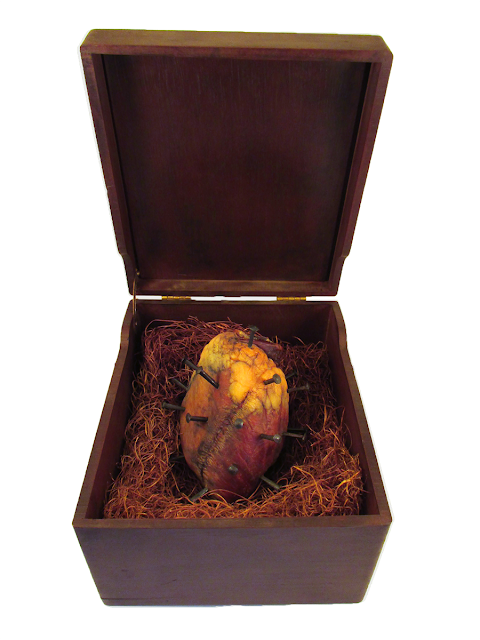 Here's the final product all boxed up.  The conjectural history of the heart itself goes back quite a ways, but the presentation box only dates back to the 1920s.  That means I can use machine cut screws and excelsior as the packing medium.  I didn't like the look of the light colored excelsior in the vampire heart project so I aged this batch with some walnut gall ink. Realistically, wood wool inside a closed box doesn't darken, but this makes for a better presentation. 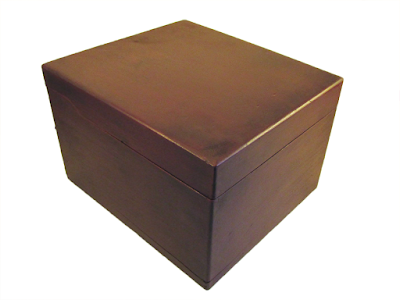 The box is a flea market find made of jointed maple. It was flame aged, re-painted in dark red milk paint, then waxed and dusted with colored grout.  I cannot praise Stacey Ransom enough for sharing the grout technique over at "Fake Believe".   It's an awesome material that allows you to create extremely realistic dust and grime.  Some light ochre grout produced the faded paint effect.  The dark buildup at the corners is black grout.  It's ideal for reproducing the look of finger wear, the mix of skin oils and dirt that builds up on locations frequently touched by human hands.

I aged the box hardware with vinegar and salt to add some pitting and corrosion.  A lot of metal weathering tutorials suggest dropping the hardware into a jar filled with that solution, which can take a while to get the job done.  Things go far faster if you lay your metal bits out on a couple of paper towels, wet them down with a water and vinegar solution, and then liberally sprinkle salt over the whole affair.

There's one small touch on the box that I'm inordinately proud of- from the wear pattern you can tell the owner was left handed.  That's a small nod to one of the traditional descriptions of black magic as the "left hand path". 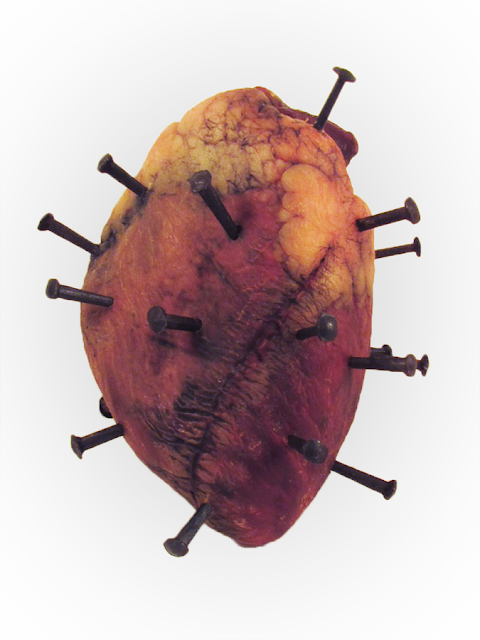 A view showing the seam between the right and left ventricle.  On the left side you can see some white stress cracks that formed as the prop shrank during drying.  Compare the current pictures with the originals from last year and you'll see I lightened up the finish a bit.  More accurately, I stripped off the entire finish and applied a new one.  To remove the original wax treatment I coated the whole thing with cornstarch, hit it with a heat gun, and then used a stiff brush to remove the resulting goo.

Why?  To get the smell right.

This isn't a "display only" prop. Since it's designed to be handled I wanted to take advantage of the one sense conventional props don't use- smell. The heart was washed down with a mixture of traditional preservatives including myrrh, cassia, balsam, and camphor. It's subtle, but whenever you open the box you get a scent somewhere between incense and mothballs. 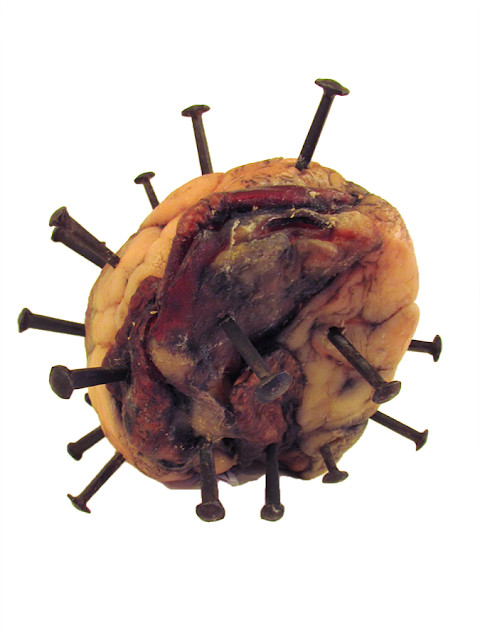 The top of the heart.  You can just make out the stumps of the aorta, pulmonary trunk, and superior vena cava. 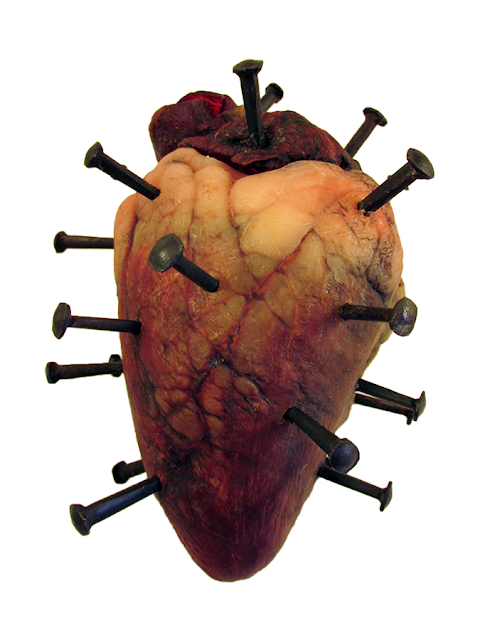 Obverse side, with the right and left atrium and remains of the blood vessels visible at the top. 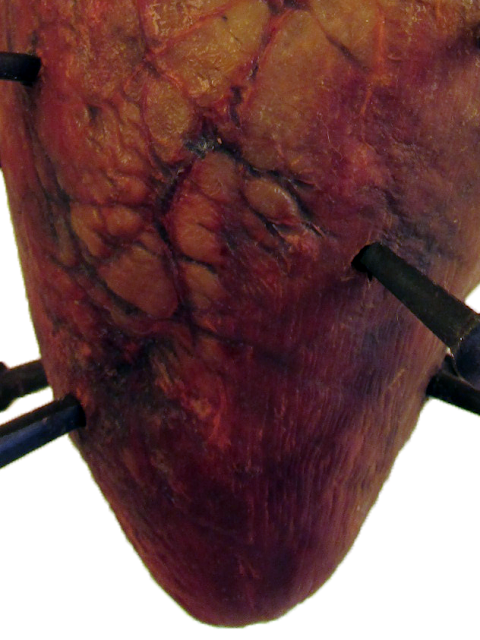 You know how you get the texture of dried meat?  Cast texture stamps off of...dried meat.  Let us have a moment of silence for the Jack Link's Original Style beef jerky that was sacrificed for the cause. 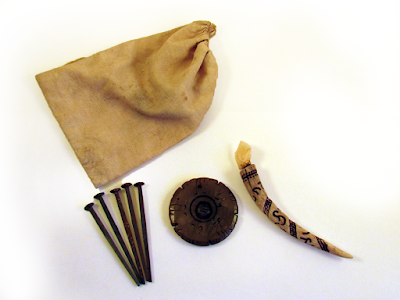 Inside the box is a small cloth pouch containing tools for the heart's ritual use. The pouch was aged with diluted leather dye and wiped down with powdered grout. 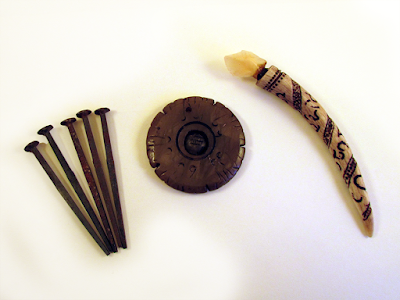 The "binding amulet" confers control of the spirit and compels them to obey the owner's commands. It's carved agate and has a nice translucence. I used schmutz wax to bring out the details of the writing.

The "harrowing blade" is used to torment the recalcitrant spirit. It's the re-purposed scarification blade I made for the Viking mythos project. I'm still messing around with that, but the knife was a perfect match for what I wanted for this project. 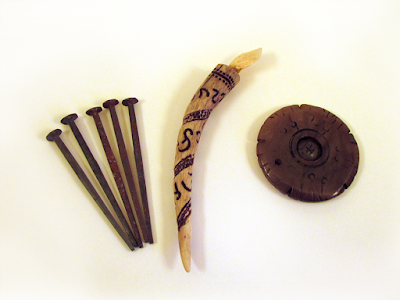 The nails are the same ones used in the heart.  They went through the vinegar/salt aging treatment and rusted up quite nicely.

Sorry to see that got yanked.

It's a beautiful prop and I am a little bit envious of whoever gets to own it.

Outstanding work!
Getting it pulled from ebay for being too realistic, that's just... Fantastic. Laughed meself silly at that one. I'm thinking there's gotta be a museum-of-horror sort of thing that ought to buy it from you;)

You’ve outdone yourself this time. The textures, the grunge, and the schumtz all really make this a fine prop. I also like the fact that you went with a subtle scent as well. Your nails are an excellent touch also. I hate to keep gushing, but this is truly professional level prop making. As for eBay … meh (that’s all they deserve).

As important as the contents of the box, your write up of how you aged the container itself is worthy of a post by itself. The large sized index card box makes a good case, especially since folks now don’t recognize the source. You can add a latch to further disguise its origin.

Unfortunately you were probably dealing with some minimum wage call center drone who had no idea what words like 'prop', and 'gaff' mean. I'm guessing you need to come right out and say at the top of your entry "This is a fake heart, made from..."

Wish I had the skills and place to put such a piece of artwork.

Nice try. If they let you sell human body parts they would have to let everyone do it. It would make it easier to dispose of bodies by spreading pieces around the world. Hey, that gives me an idea...

If anyone is looking for other "props" of human parts let me know. I have a bunch ready to go.

That is a beautiful prop. I made a half-burned heart prop (the heart of Percy Bysh Shelley) as a prop for a vampire LARP, but it doesn't compare to your work. Shelley's heart does make an excellent conversation starter though.

Shelley and friends? I can't help but think of Tim Powers's The Stress of Her Regard.

That would be a real devil of a scenario to LARP, though....