The history of exhibition gaffs, defined narrowly as fake or manufactured creatures and body parts intended for viewing by the public, stretches back thousands of years.  For most of that time they were primarily religious in nature, serving as fixed or traveling examples of spiritual or mythological belief made real.  What's really interesting is that the phenomenon crosses cultural boundaries.   No matter what the belief system or era you'll find all sorts of ginned up "artifacts" associated with it, from the mummified kappas of Japan to the West's long tradition of collecting the body parts of Christian saints.

The desire to see a bit of the divine may have waned, but it's still around.  Hence the existence of a site like For All the Saints, a ministry that specializes in making Catholic relics available to churches for special occasions.  Browsing through it's collection gives you a fascinating look inside a cultural niche that draws on thousands of years of history while being surprisingly technologically aware.  I mean no disrespect, but YOU CAN ORDER A PIECE OF ONE OF GOD'S CHOSEN OVER THE INTERNET.  That's absolutely amazing.

From a propmaking perspective, there's a lot of really interesting stuff here.  Catholic relics have been a huge influence on gaff displays in the West, with very specific iconography like rayed circles and sealed mounts becoming secularized over the years.   Just look at this presentation of a bone chip from St. Anthony of Padua.  Even non-Catholics would immediately recognize it's something precious and highly valued thanks to the ornate stand for the theca, the small sealed case that contains the actual relic.

The ritual around the authentication of relics is pretty interesting in itself.

Any bishop or leader of a religious order may produce relics. The small piece of relic material is usually enclosed in a locket-like container called a theca which has frequently been highly decorated by nuns. The relic is tied into the theca with red thread and then sealed with red wax. While the wax is still soft it is imprinted with the seal of office of the person authorizng the preparation of the relic.

Starting in the Middle Ages many abuses grew out of an illicit trade in relics, many of which were counterfeits. The Church declared that any relic that would be used for public veneration must be accompanied by a document of authenticity. The document describes the relic and is signed by the authorizing official or his representative. Below are a couple examples of these "authentics." 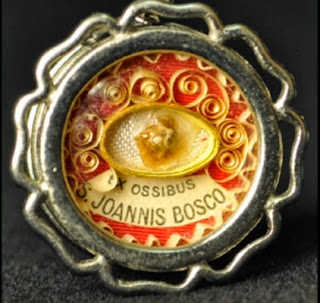 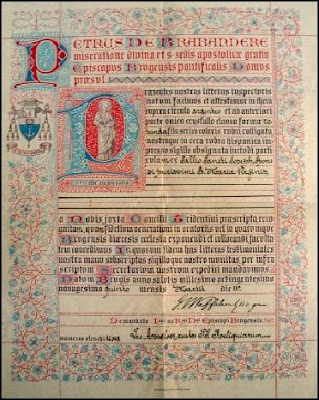 As usual, the guidelines for spotting fakes are where propmakers will find some of the most useful material.  Props are by nature counterfeits, so experts trained to spot them are the best resource for everything from how to make a realistic wax seal to duplicating Vatican documents.

I know some of you are probably asking yourselves "Why is he featuring this?"  Two reasons.  One, relics are an important part of the history of gaffmaking.  Two, a site like this is a goldmine if you're willing to use it.  I'm thinking particularly of vampire hunting kits.  Almost every existing example is a Blomberg-style kit, which I'd argue is decidedly Protestant, if not Calvinist, in it's presentation.   They're workman-like collections of tools almost totally devoid of ornamentation, designed to physically combat the menace of vampirism without any consideration of fighting it's spiritual taint.

It's not hard to explain why they have that aesthetic.  The most obvious reason is that the originals were put together by British antique dealers based on celluloid examples created by British propmakers for the Hammer vampire films.  Both groups had limited cultural exposure to Catholicism, not to mention a notable dearth of Catholic items to draw on.  Ironic that, given the explicitly Catholic Abraham Van Helsing from Stoker's "Dracula".

Oddly enough, the Catholic church and it's approach to vampire killing has been a far more prominent in literature.  I'm not sure why propmakers have been reticent to draw on that body of material, other than the fact that there are vanishingly few visual references.  One interesting example is John Steakley's "Vampire$", which featured all kinds of Catholic goodness, like Vatican vampire hunting warrants, customized and blessed stakes for self-destruction in case of infection, and specialized rituals.  Something that was totally dropped from John Carpenter's rather dodgy film adaptation.

I'd love to see someone tackle a "Catholic" vampire hunting kit, filled with all kinds of ritual items and documents drawing on the church's long history.  The aforementioned warrant would be cool to see, as well as sanctified weapons, specialized gear for emplacing seals in and around structures, spriitual "decontamination" kits for treating infection...the possibilities are endless.

This is a first class article Propnomicon and that’s also a nice link for spotting fakes. Holy relics are not just confined to Christianity, although that is perhaps what we in the west are more familiar. Other religions such as Buddhism, Islam, Hinduism and others have a veneration of relics as well. For advanced gamers you have to overcome thorny questions such as, “How do you turn a Buddhist vampire?” For that matter how do you turn an atheist vampire?

Generally in Catholicism relics are graded by three classes: A first class relics is a physical part of the saint such as a bone or tooth, and a second class relics is something personally owned and intimate to the saint, such as a bit of clothing, a hat, a sword and a third class relic is an item associated with a first or second class relics and might be something as distant as dust from a tomb, water from a well blessed by a saint, so it is associated, but not very directly. Relics in Catholicism are regulated by canon (church) law. Relics are different from blessed items, but I am not sure how that works into gameplay.

As an aside I’ll warn you that in your prop making, some items may prove to be offensive to a specific religion or sect, so be observant to good sense when you make your props. Also just keep in mind the federal and state laws regulating the possession of human remains and the context of their ownership. However as far as props and faux items go -- anything goes. (Suddenly I am thinking of the opening song in of Temple of Doom).

Tooting my own horn:
http://coastconfan.blogspot.com/2013/02/the-logical-vampire-brief-overview-on.html

Just for fun, the opening song of Temple of Doom, a modification of the Cole Porter song, Anything goes: http://www.youtube.com/watch?v=N1H9eKWPGRo

It´s interesting that there are already some mentions of relics from antique times. There were for example some cases of fossils housed in greek temples, which were thought to belong to mythical creatures or heros, for example a mammoth tusk which was said to be a giant boar´s tusks, similar to the one which was killed by Hercules. You can find more information about this very special topic in Adrienne Mayor´s book "The first fossil hunters".

Not sure if anyone else would see this on the site, but this little article provides a great place to start to make a reliquary, even just for props. I wouldn't have thought of using garage sale clocks as a base. Imagine what some paint and sculpey could do....