I think this is the first time I've spread a project over multiple days because it was so big.

Dale Bigford is the creator of this immense vampire hunting kit, which takes the tropes of the genre and turns them up to 11. Out of the dozens of kits that have been featured here this one easily takes the top spot in terms of size and the number of items included. The sheer amount of work assembling everything and then carefully packing it up in an orderly fashion is mind-boggling.

Here's Mr. Bigford talking about the inspiration for the kit:

"My friends and I were drinking wine watching an old Hammer Horror Dracula movie (Peter Cushing is the ONLY Van Helsing) in Germany (military) in 2008. Eventually my friend turned to me and said "you've got a box of vampire killing stuff right?" I answered "no...but why don't I"? So I started to build one...and it got outta hand. I just finished it this week. I didn't slave over it everyday for four years, but hit ALLOT of european antique/flea markets, did ALLOT of work and here it is.

One thing that always nagged at me was this:
When Van Helsing shows up in these eastern european countries he always has very little ON HIM yet always has whatever equipment is necessary. How could this be? In the age of steam ships, trains and carriages the answer was simple: A train case or steamer trunk.

I wanted to go for the look of a converted/heavily modified clothing train case (complete with added victorian-style upholsetered back padding and heavy leather straps (which only the BURLIEST of assistants could shlep through mountain passes or abandonded cemeteries).

It also was important to show a kit that, after the passing of the great doctor, passed through many hands from the latter 19th-20th century and continued to be modified/added to as new knowledge came forward and different techniques were tried. Modified when/as/how it could be in the disheveld, chaotic life of someone who KNOWS vampires exist.

I admit in this day and age laser-sighted automatic pistols and high-powered stake guns are more effective, but they utterly lack the romance of the Victorian period." 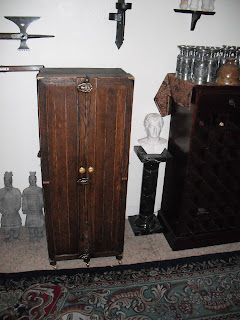 We start with an overall shot of the trunk that provides a sense of just how large it is. 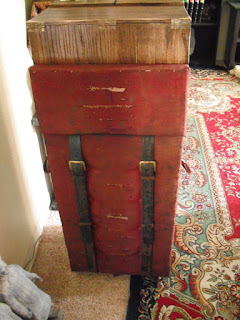 I love this touch. A backboard with shoulder straps makes perfect sense for transporting something this big. In my mind I can see the put-upon assistant straining under the weight of the thing while the good Doctor obliviously waits for him to catch up. 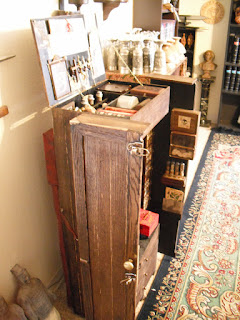 The first set of panels opened to expose the interior. 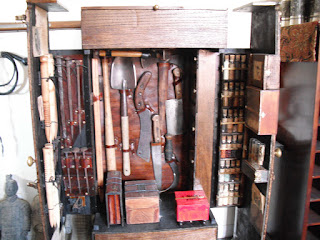 Stakes and spikes to the left, tools and weapons in the center, materia and components to the right. The one detail that really stands out to me is that everything is tied down or otherwise restrained. Far too many artists ignore that basic usability factor. 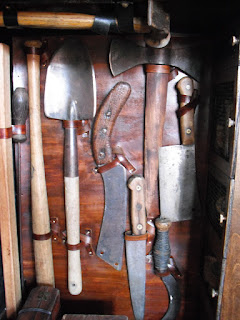 A closeup of the tool panel.  The one critique I have is that the patina of the wood varies so much, but that's a trifling issue. 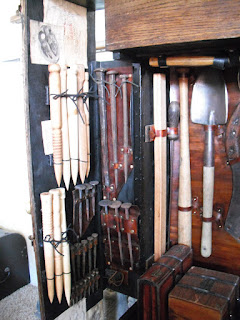 You can never have too many wooden stakes or iron spikes. One of the legacies of my youthful exploration of abandoned buildings is an appreciation for the utility of heavy spikes in defeating doors, windows, and locks. They're incredibly useful tools for breaking and entering. More importantly, a spike in the jamb keeps a door from closing. Getting in and out quickly no doubt comes in handy when hunting the undead.

I'll have some more shots of Mr. Bigford's case, including a closer look at the dozens of material components, tomorrow morning. If you want to jump ahead you should be able to browse the album over here.

That is the ULTIMATE vampire hunting kit. I am awestruck and amazed. It is incredible!

this is marvellous, thanks for posting!

"I admit in this day and age laser-sighted automatic pistols and high-powered stake guns are more effective, but they utterly lack the romance of the Victorian period."

Be at ease with the technology you have; I suspect the 'upgrades' you mention might be less rather than more effective.

Recall that vampires don't show up in such handy devices as mirrors, and (depending on rendition) photographs and television cameras. The British version of Being Human showed the utter ineffectiveness of modern security monitors in this regard. Laser-sighting might seem helpful, up until the point you actually needed to kill vampires... after which you might discover you'd been toyed with. Likewise, automatic pistols,... really? Metal bullets? Surely you know better.

Of the tools you mention, a "high-powered stake gun" sounds the most feasible, but it's not a new concept. Look up "crossbow". Now replay the ending of the first (Jonathan Frid) "Dark Shadows" movie, and notice the initial failure of the crossbow bolt (fired from a distance) to arrive on target at the vampire's heart. Oh, vampires move fast. That's a drawback for long-distance weapons.

So, "romance of the Victorian period" aside, have some respect for the hard practicality of Victorian engineers, people who knew how to get bridges and tunnels built from point A to point B effectively and efficiently, and who did what they did they way that they did it for a reason. Sometimes a hand-held wooden stake, with mallet, is really just the best tool for the job.

The phurba is a really nice touch. I'd like to see a similar prop set for Carnacki the Ghost-finder!

Egads that is a monster of a kit. It just wants Van Helsing to turn to his caddy, holding out his hand and say, “Igor, a number seven mashie niblick stake and a medium hammer, please.” That and deploy the kite with the phantasm detector no doubt.

Apparently size does matter and this is the most extensive (and heavy) kit seen to date. All I can say is wow.

Usually I am a stickler for patina as well. But because of the description that this case has been repeatedly updated and tweaked through multiple parties, I would almost expect it to be a hodge-podge of patinas as newer parts or replacements were fabricated.

It's a good example of how a bit of background story can cut the artist a little leeway in a creation.

... oh, and... if I seem a bit defensive of "the hard practicality of Victorian engineers," please forgive me.

My long-late grandfather Ivan Sergeivich Zaroodny was a Cossack, not part of Victoria's Empire, but he had been for a while her contemporary. His engineering work on this railway project is the reason his children were born west-to-east from St. Petersburg to Irkutsk, Siberia (at the southern tip of Lake Baikal, just above the dip in the central northern border of Mongolia — that was my mother's birthplace).

Maybe, in the course of its travels, Van Helsing's case could have ridden the longest regularly operating railroad on Earth, chasing some errant and over-aged voivode across the taiga to help persuade him of the error of his bloodthirsty ways. It would have shared the train with some interesting characters, soldiers perhaps reporting to the front for the Russo-Japanese War, diplomats bound for Manchuria and points east or south, Siberian wheat shippers, convicts for prison camps and construction sites, Crimean Tartars who might be old veterans of the Crimean War (would they taunt Englishmen by reciting parts of "Charge of the Light Brigade"?), Mongols and Tuvans and Samoyeds....

Romance of the period, truly.

What a romantic ending that project had for my grandfather. While he was out of the country on a trade mission, the border was closed. He never again got closer to Russia than the émigré settlement in Harbin, Manchuria. While he was kept out there, his wife — a teacher and founder of schools all along their travel path, helping free the children of former peasant families from the land through education — was accused of hiding a refugee from a purge, and convicted, and executed by a firing squad in Siberia, leaving their children motherless, the youngest child (my mother) only two years old. It finally took diplomatic intercession to get the children sent south across the border to join their father in Harbin, for those precious years together before he died... just as they were ready to emigrate to America... while the Japanese were occupying Manchuria. Romantic times.