One of my ongoing projects is a recreation of Van Helsing's vampire killing kit from "Dracula". I talked about it a bit last year, but it's one of those efforts that will probably take years to complete. I want it to be accurate to Stoker's text and for this particular recreation that means tracking down genuine antiques.

The guidebook that I'm using for my effort is Leonard Wolf's outstanding "The Annotated Dracula" . If you have any interest in Dracula I would strongly recommend picking up one of the absurdly cheap used copies on Amazon. The story itself is already a propmaker's dream thanks to it's epistolary nature, but Wolf takes it one step further and includes copious historical references in his marginalia. That includes maps, illustrations, period documents, and detailed looks at locations mentioned in the story. 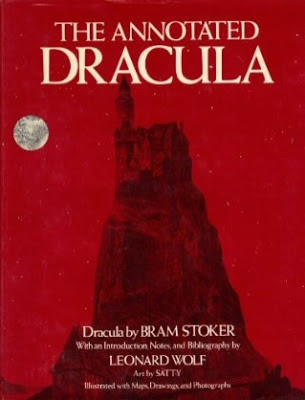 Another classic monster you might want to explore is Frankenstein. I write that quite deliberately, since I've always found the good doctor, and not his creation, to be one of the most horrific figures in literature. I can't be the only one shocked at his behavior, not to mention the free pass he seems to get, since getting inside his head is it's own mini-genre. Beyond the various novels building on Mary Shelley's original work there are an amazing number of books built around the conceit of being Victor Frankenstein's diary. Two of the best, also notable for being absolute steals from Amazon's used section, are "The Frankenstein Diaries" by Hubert Venables and "The Diary of Victor Frankenstein" by Timothy Basil Ering and Roscoe Cooper. 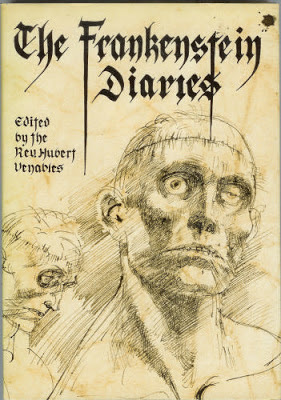 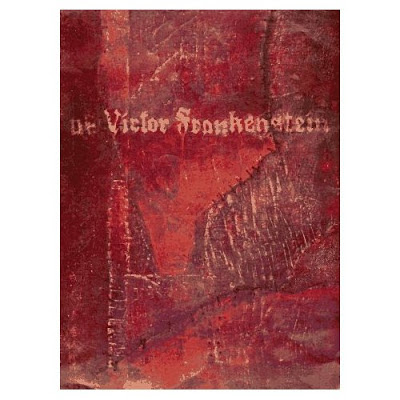 Besides being long out of print, both books are profusely illustrated alternate takes on Dr. Frankenstein's obsession with creating life. Venable's version features a text written from the viewpoint of the doctor interspersed with dozens of pictorial elements including photographs of locations and vintage copperplates. But the real highlights are the wonderful pen and ink drawings of equipment, experiments, the massive lab where the deed was done, and multiple views of the Monster in various states of assembly. 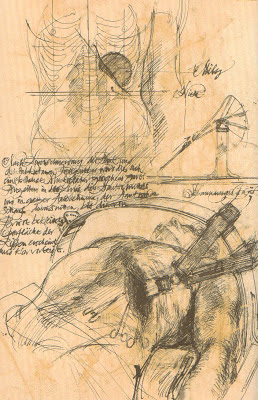 Ering and Cooper take a more stylized approach. The book is all art, each page a reproduction of the parchment pages allegedly found after the final confrontation in the frozen north. The handwritten text can be difficult to read at times, but the book has some truly memorable images in charcoal and ink. The early pages feature illustrations of technical equipment and nicely done anatomical studies of the monster's components. Those start be be overshadowed by some very dark and tortured imagery as the story moves toward its conclusion. (Please pardon the spectral artifacts in the scan below.) 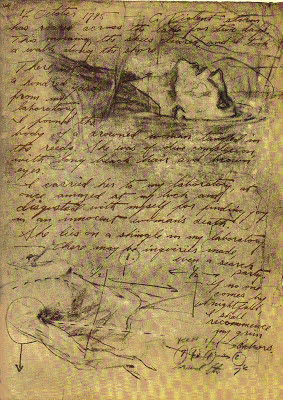 I would heartily recommend both books. They're intriguing versions of a story most people are already familiar with, and I think there are some insights to be gained from comparing how they approach the same subject matter. One alternate use you might want to consider is using imagery from the books for the notes of Herbert West. They're absolutely ideal for that purpose and would make great handouts or accessories for a larger prop project.

Wow! Those look amazing! The sort of thing I want to treat myself to when I have that thing called money! :)

Did you price out the used copies? Even with shipping you can score one for a five spot.

I recall reading an annotated Dracula by Florescu and McNally in college.