This Elder Sign pendant is brought to us by Yiyo-no-Shashin. 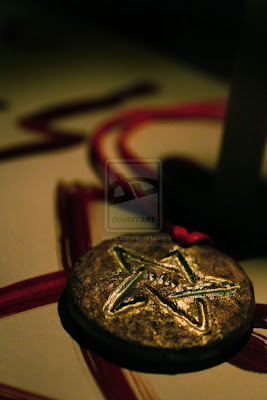 I can´t help, but I never liked the Derleth version of the Elder Sign. Not only is the referrence to the pentagram not really well fitting into the whole Lovecraftian mythos. Something I like really like on the stories of Lovecraft is their independence from classical mythology. Of course sometimes here and there is a reference, like Dagon or the Mi-go, but in the whole it´s a cohesive universe. I also think the overall desing of Derleth´s Elder Sign is not only comparably lame, but also somewhat stupid. This strange warp-shape would make it very hard to copy such a sign correctly, because it has no defined shape. Normally signs or letters have a certain abstraction, so they look always similar and are comparably easy to identify, because they have something what I would call "literal architecture". I really hope you understand what I mean. Lovecraft´s own version of the Elder sign is perfect as an example. Its shape is unique and different from all our known signs and letters, nearly somewhat botanical looking. It´s simply made from a combination of lines, so you could easily paint or draw it on paper or carve it in stone or wood as well. Even if there would be some slight differences, for example of the distances between the lines, it would still always looks like it looks. It´s like the difference between block letters and cursive. You can vary an "A" to some degree in block letters, but there is not buch change. It´s somewhat different with letters which have even as block letters curved parts like in the "B". But in cursive the differences beteen all letters can be so massive they are sometimes already cryptic. An important sign like the Elder sign shouldn´t allow too much variation, nor should it be to complex. If you look at a normal pentagram, you see it has actually next to no variation possibilities if you draw it with straight lines, same thing with a Star of David or other geometrical signs.

Of course I don´t wrote this discredit the artist who sculpted this amulet, this are only some of my personal thoughts about the Elder Sign.

I've never really had a problem with the design. If you want an explanation for it, you could say that the more familiar pentagram symbol was taken from the original elder sign in the same way that Christianity co-opted earlier pagan beliefs.

As for the piece, my first mythos creation was surprisingly similar. Except that I made mine with raised lines.

It's a star! It's a tree! The August Dereleth version seemed to be going for a 2d effect on a multidimensional symbol. I think the twisted "arms" of the "star" indicate that the extend or have extended from other dimensions to, or from a central location. A 3d laser hologram would still not do it justice, no more than a drawing of a Kleine bottle. http://en.wikipedia.org/wiki/Klein_bottle