The Mountains of Madness Project Update

Things are moving along with the Mountains of Madness project. Here's a work in progress shot of the blueprint for the expedition's Dornier Wal aircraft. A lot of the work that went into getting it to this point is totally invisible. I've been trying to make logical tweaks to the baseline design to bring it more in line with the level of performance in "At the Mountains of Madness". That means taking into account the increased power from an uprated engine, the weight savings gained by swapping structural steel for aluminum, and the increased lift generated by an enhanced wing profile. Much of the inspiration for those changes has come from the improved military Wals produced under license for the U.S.S.R and the two modified reconnaissance planes used by the German Antarctic Expedition of 1938-1939.

Update: Elmo Iscariot sent over a snapshot of the plane in Ian N. J. Culbard's graphic novel adaptation of "At the Mountains of Madness".

It's a pretty faithful depiction, and I absolutely love the page layout. 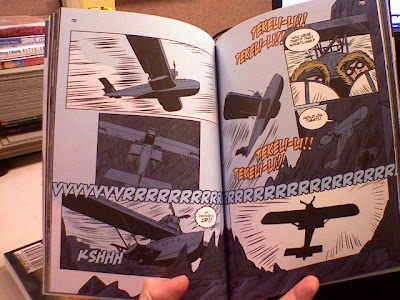 I sent you the go-ahead to use that image form the AtMoM comic a while back, BTW; I suspect I'm still falling into your spam trap.

No, you fell into the black pit of "I should post that in a few days...look, something shiny!".

My sincere apologies for my forgetfulness.