I don't think I've ever featured a mainstream news story, but when Andrew James sent over a link to this one I knew I would be making an exception. Sideshow-style gaffs have a history going back hundreds, if not thousands of years. Now scientists are taking a close look at the Buxton Mermaid, a specimen that's been around for close to two centuries.

University staff and students are doing tests to uncover the origins of a museum exhibit which looks like a mummified mermaid.

They have already found the mysterious Buxton Mermaid's hair is human.

The University of Lincoln team is now testing the DNA of the mermaid's tail to see what fish it came from.

Anita Hollinshead, a conservation and restoration masters student, came across the mermaid while working at the Buxton Museum and Art Gallery.

"We think that it came from the mid-19th Century," she said.

"We are still doings tests to find that out." 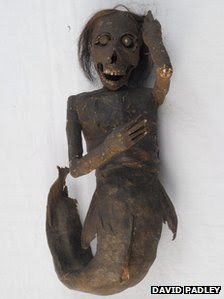 It will be interesting to see if this "mermaid" was exported from Japan. Mummified supernatural creatures, or "yokai", were popular attractions at traveling fairs long before regular contact with the west was established. Many ended up being given as temple offerings, and thanks to the protected environment of the shrines some have been able to survive for hundreds of years.

It's fascinating how both the east and west developed a tradition of faux creatures and body parts for both entertainment and religious reasons.
Posted by Propnomicon at 3:00 AM

It’s nice that an old piece like that can be reexamined. Many old carnie gaffs were destroyed over the years through neglect leaving precious few. My personal favorite in that genre is the Fiji mermaid shown by P. T. Barnum in the 1840s (see the Wikipedia article and http://www.roadsideamerica.com/meraves.html) although IT is pretty close too.

Really a nice masterpiece of another "Jenny Haniver" siren

I think I need to change the font for my Feed-Reader, though. I keep seeing the topic title as "The Buxom Mermaid" and going to click it a second or third time...

That´s really interesting to see an X-ray image of such an old feejee mermaid. There were actually several ways in which they were constructed, and many of them included no monkey parts at all. Sometimes the jaws of certain fish were also used for the teeth.
I´ve made two feejee mermaids myself, and it was really a lot of fun, yet also a lot of work. BTW Robert, a Jenny Hanivers is something different, they were made from skates with parts of their fins removed, and were later dried in strange positions. Such Jenny Hanivers were already produced many centuries ago, and pictures of them were already shown in very old books like Conrad Gesner´s Historia animalium.
There are also some other drawings from old bestiaries which indicate that things like feejee mermaids which were made from the body of a fish and either from parts of a monkey or sculpted with papermaché, existed already 500 years ago.

That is very cool. I love mummies.

Here is a further story from the BBC on this