Ross MacDonald, Master of the Craft

I'm a huge fan of Ross MacDonald's prop work, so you can imagine how I felt a few weeks ago when he Tweeted he was working on a new book prop. Yesterday he not only revealed what the project was, but posted an in-depth look at it's creation. The massive tome measures roughly 12" wide, 17" wide, and 5" thick and weighs in at close to 20 pounds.

"The interior is filled with collages of images and text from period books. Most of the text is German, taken from 15th century books. Many of the images are from the same period, for the sake of authenticity. But for the sake of what looks cool, there are images from other periods as well. The ones on this spread include 2 diagrams from Georg von Welling's 1735 Opus Mago-Cabbalisticum et Theosophicum, a number puzzle designed by Ben Franklin, a Celtic knot, a diagram of a microbe and a heraldic device. One other pages, there are bits of electronic schematics, some diagrams and handwriting from George Washington's school notebook, and diagrams of crystals and fungi from a 19th century dictionary." 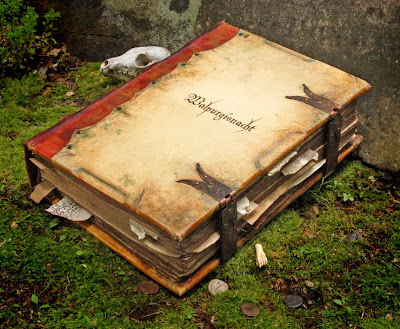 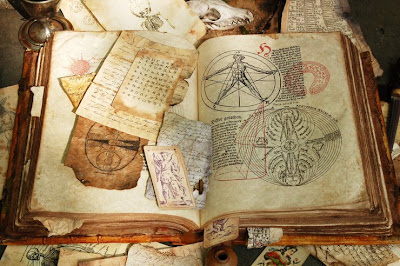 It's a beautiful piece of work, and Mr. MacDonald's generosity in providing a look at it's creation is much appreciated. You can find more examples of his prop and illustration work at his personal site or his Drawger blog.

On a peripherally related note, one of the things I like about this prop is that it doesn't go overboard with the cover embossments and spiky bits. I love sculpted detail as much as anyone, but a prop tome covered in decorative resin or metal flourishes can never be put on a bookshelf without risking damage to the prop or the books around it. The space required to store the tome, along with a dedicated display stand or storage box, can quickly turn the most lovingly hand-crafted work into a white elephant.
Posted by Propnomicon at 3:00 AM

Many thanks for the kind words - glad you liked the book. The director is a history buff, and he and I agreed that Walpurgisnacht should look like a real 500 year old book. I wanted to avoid anything too over the top in the design, and yet still give you enough visual cues to really convey the creepiness and malevolent vibe that the book gave off. When designing these kind of prop occult tomes, it's really easy to stray too far into what I call "Bedknobs and Broomsticks Territory".

I'm one of the lucky guy that can touch with hands some works made by Mr. Ross MacDonald!

A big thanks to him from a big fan!

Here’s a situation that arises continually in the Lew Archer novels: someone Archer is investigating is surprised to learn how much he knows about them. In Black Money Kitty Hendricks voices this surprise in virtually those very words –“How do you know so much about me?” Usually, though, the knowledge Archer has obtained when this question comes up turns out to be peripheral – that is, it doesn’t bear directly on the solution to the case but is just a part of the hopelessly tangled morass of action and information Archer is working his way through. In the novels that most critics and scholars seem to feel comprise the mature Macdonald style – The Galton Case through The Blue Hammer – the reader is constantly being thrown off the scent this way.
http://postmoderndeconstructionmadhouse.blogspot.com/2014/12/ross-macdonald-black-money.html#.VLdYidKUc7U