You Gotta Have Heart

One of the blackest of black magics is the binding of a human spirit.   In occult circles the abhorrent rituals required to place a soul under the control of a necromancer are rightly feared, both for their immediate and long term consequences.   More often than not the practitioner who dares to experiment with such matters finds their own spirit at risk.

We present to you today a talisman used for that very purpose, crafted from the heart of a suicide.  Traditionally, those who took their own lives were viewed as a spiritual risk to the community as a whole.  Their restless souls could trouble a town or village for years.  In most cases they were mere annoyances, but particularly bitter or angry ones could be terrifying, lashing out at anyone nearby and slowly growing more powerful over time.  Preventing such occurrences required burying the heart of a suicide at a crossroads.

Unfortunately, not everyone viewed a restless spirit as a liability.  For some they were a precious resource with significant magical power.

The heart used in this binding talisman shows the characteristic distortion of one placed inside a box while fresh.  The moist tissue molded to one corner of the container and then dried out, displaying a distinctive ridge.  At some point the heart was recovered from it's resting place at the intersection of two roads and the spirit ritually bound.  During the ceremony iron spikes were nailed into the desiccated flesh, allowing the necromancer to trap the soul within.  Only through service to it's new master could the victim gain some measure of freedom and avoid the torments of punishment. This was a fun little project.  Technically, it's just a variation of the vampire heart I did back in 2010.   You can check out the build notes in the archives- Part 1, Part 2, Part 3. 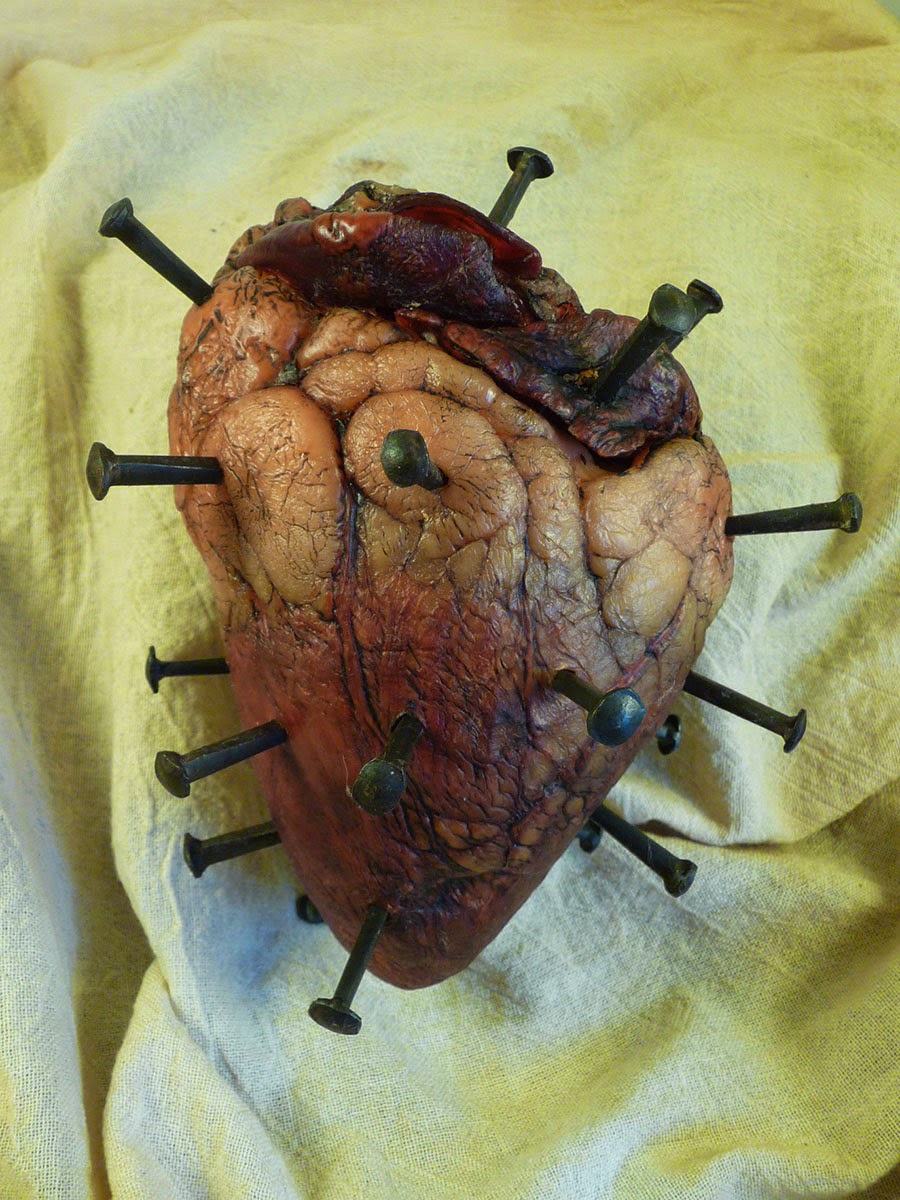 I'm pretty happy with where it is now, but I think I might add a layer of dust.  The wax-based schmutz does a great job of bringing out the textures and griming it up, but I think it would look better with just a little more filth.  And, yes, I realize how odd that probably sounds.  Heh. 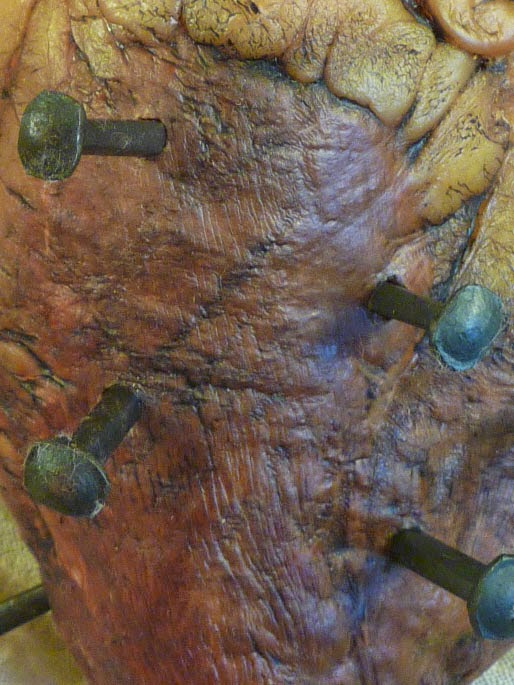 Here's a closeup of the surface texture under even illumination.  I spent way too much time working on those damn spikes not to show them off.  They were old store stock from Ebay and arrived looking like they'd just come out of the drop forge.  That shiny, fresh metal just wasn't going to work.  First I scrubbed them down with hot soap and water to remove the protective oil coating.  To induce surface pitting and rust they were boiled in a vinegar and salt solution and then air dried.  To get the buildup of crud where they entered the heart I drilled out every hole, schmutzed the spikes, and then drove them in to the heart.  That produced a nice little ring of material where friction peeled the wax off the shaft.

Now I just have to come up with an appropriate container.

Absolutely stunning! I bloody wish I could produce such a darn nice thing. Knowing myself I would take the lazy route of just mummifying an actual pig heart or something.

What a great prop and a fine write up. The wax finish gives it a correct looking sheen and the fattiness on the heart has that proper yellow color. You’ve really progressed with your prop making over the years.

One thing that would doll up the presentation would be a display case. I like the ones that are fairly square and have glass all the way around. They can be pricey, but I pick them up at hobby shops and the like on sale when I can. The cases can be aged up a bit to simulate Victorian or Edwardian curiosity cases. I think they are well worth the investment for displays and they can be reused for different projects. By the way, old wall paper rolls may have very old-fashioned patters that can be used to line the bottom these boxes, inside regular boxes and for photographic backdrops. I haunt the thrift shops to look for old stock rolls for projects.

Here is a link for an example: http://www.michaels.com/frames/collector-cases/809188426 and http://shop.hobbylobby.com/products/crystal-clear-display-case-252544/ and if you want modern plastic for a contemporary museum look http://www.containerstore.com/shop/collections/display/cubesCases?productId=10001592

That sculpt is stunning. The texture is spot on!

Very gross. Really looks fatty and like beef jerky. Or it may be too close to dinner time for me to think objectively.

This is such a nice project and follow-up to your previous heart-felt efforts. It was neat how this combines the earlier work into the witch-jaw project you had featured not too long ago, too.
This would be great on a cranked or wind-up, rotating display. Drop in a dime and get a view in the round! Thanks for all the great stuff.

Thank you for the kind words. Why not try mummifying a pig's heart? They're anatomically almost identical to human hearts. My only concern would be stabilizing them with something like alcohol before drying them out.

Casing is always an issue. A good container can make a good prop great.

And that's a brilliant idea about using vintage wall paper as lining.

Unfortunately the latex isn't vulcanized and immersion would turn it white. That's an approach I might try down the road.

I actually use a texture mold cast off a piece of beef jerky. Heh.

I wish I could afford a rotating display. That would be ideal.

Well, it is pure sterling what you have here:)
Have you considered a case in the style of a reliquary? I'm thinking like one of them triptych double door things, or maybe just the upside down aquarium with gold trimmings and satin pillows?

I've got a project that requires a mummified pig heart. Also covered in iron nails. I reckon you too have seen that calf(?) heart they found in the french cemetary?

Anyhow, mummifying things isn't hard, provided they're small. I would pickle it thoroughly in heavy salt/sugar solution, let it dry through, then dip it in shellack. Some wax for finishing. I've done similar roadside taxidermy before, albeit not on anything as thick as a heart.

We always enjoy the wonderful objects posted at your great blog....
A great weekend to you and yours....

I'm sure I'm not the only one out here who would love a more detailed how-to on how to achieve that dried flesh effect. I have the supplies, I'm just not sure of how to begin.

For movie work, we always used to soak new nails overnight in a big four gallon plastic bucket with just enough battery acid to submerge the nails. Washed and left to dry the next day, they rust and tarnish right away. We did this to make fences look like old construction and such.