I don't normally spend time talking about modern, mass-produced merchandise, but in this case it's more than warranted. During the classic era of Lovecraft's stories "Marble's" manufactured a huge variety of outdoor equipment sold in retailers across the nation. Odds are that an adventurer or outdoorsman in the 20's and 30's had at least one piece of Marble's gear on him.

Those designs are still being produced today, albeit in Chinese factories, and the modern reproductions like those at B and K Enterprises can serve as very affordable alternatives to vintage pieces. Here's a look at some of items that are available: 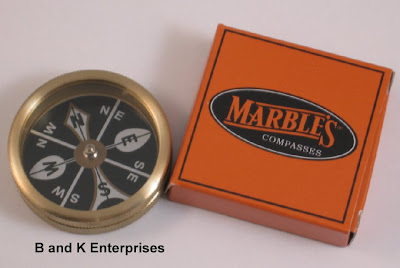 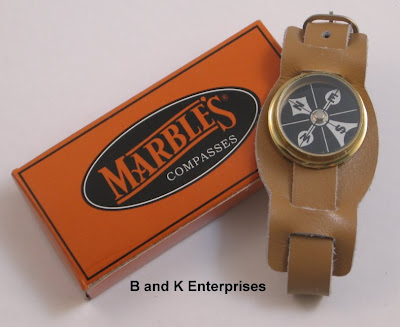 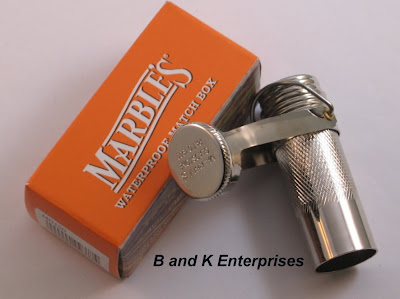 Not surprisingly, it appears that the manufacturers of the modern knock-off's have cut some corners. They're reportedly using the exact same patterns, but with lighter gauge metal, lower quality leather, and a generally inferior attention to fit and finish. That isn't a major problem if you're buying them for display or prop use, and it also has an unintentional side benefit- the prices for authentic vintage Marble's gear have dropped. Sometimes to the point that buying a matchsafe or compass that's close to a century old is only slightly more expensive than buying the inferior modern reproduction.
Posted by Propnomicon at 3:00 AM

"Period" or classic, if you prefer, props.

My personal Fav AND the photos are nicely tagged as always - don't think we fail to notice.

Have you lost your Marble's?!

DOOOD!! Thank you so much! I've been looking all over for that exact match case! I have a friend who's a girl scout master (mistress?) and she refuses to part with hers. They sold them everywhere up until just a few years ago when I suddenly decided I should have one.

Thanks loads for posting this!

Hey, I have an older version of that match case :) Got mine a few years ago at the flea market. Those things are great. I wish I could find a couple more (of the older ones anyway).