The source material for this project is a vintage postcard from 1919 depicting the Salem, Massachusetts railroad and trolley station. I chose that particular card for a couple of reasons. First, Lovecraft based many of the details of Arkham on Salem so it's only natural that we can map the period features of the real town to his fictional creation. Second, the station is a named location in the "Arkham" supplement from Chaosium that players are likely to visit or at least be aware of. Finally, and perhaps most importantly, the original card was produced before the magic year of 1923. That means it's now in the public domain and I'm free to use it any way I want without any copyright worries.

After scanning the original I did some basic cleanup work to remove the dust and dirt that had accumulated on the card over the last eighty some years. I had originally intended to replace the existing Salem-specific caption with a new one generated using a matching font, but after fiddling around for an hour I couldn't find one that matched the lettering on the card. Since that's about the limit of my short attention span I decided to recycle the existing caption and generate any additional letters using bits of the printed text.

The letter "K" in Arkham is a bit dodgy, but it's good enough to pass a casual inspection.

Here's the final file at 300 DPI sized to reproduce the 5 7/16" by 3 1/2" measurements of the original. Just click through for the high resolution version. 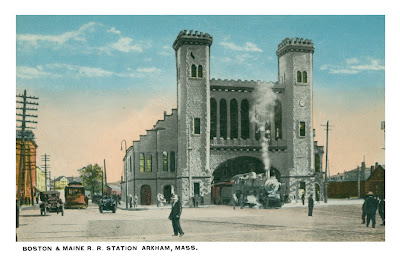 And here's the back of the card: 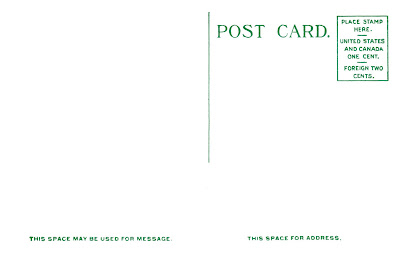 Posted by Propnomicon at 2:56 AM