"At the Mountains of Madness" Prop Photo Set

The Miskatonic University Antarctic expedition of 1930 is one of the most enigmatic chapters in history. It was a collection of firsts- the first Antarctic expedition to use heavy air support, the first to use drilling gear to penetrate the ice, and the first to widely range across the interior of the continent. Despite it's record of achievements it's more often remembered today for the multiple fatalities that brought it to an end. More intriguingly, the circumstances surrounding those deaths have puzzled researchers for years because significant amounts of documentary evidence about what happened, including journals, reports, and photographs, have been locked away for close to a century.

This is a collection of prop photos recreating events, people, and places from H. P. Lovecraft's classic story "At the Mountains of Madness". The thirteen 4" by 6" black and white photos in the set were produced as handouts for use during a "Call of Cthulhu" RPG session and were created using retouched historical pictures, original art, and studio photography with actual props. 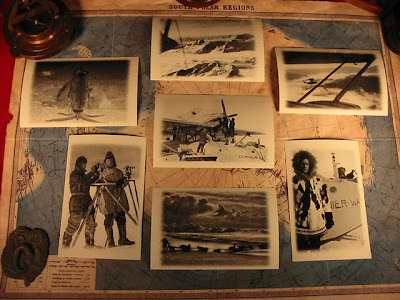 Going clockwise from the 12 o'clock position the photos depict:

1. A picture taken from the aft camera mount of one of the expedition's Dornier Wal aircraft of low mountains.

2. Shot taken from the forward camera mount on a Wal of another aircraft flying in formation.

3. The young Mr. Danforth posing in front of a plane.

4. One of the expedition's teams of sled dogs transporting supplies.

5. Prof. Lake and an assistant taking solar fixes. The close proximity of the pole made regular solar and celestial readings a necessity for navigation.

6. One of the "Elder Things" outside the mouth of the underground chamber where it was discovered.

7. In the center, technicians check the engine of one of the expedition's Dornier Wal aircraft. 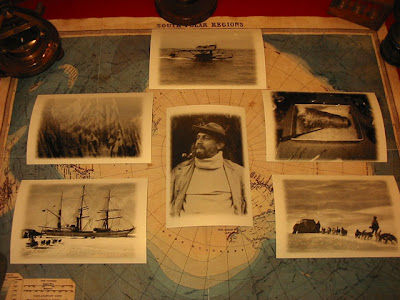 Again, starting from the 12 o'clock position:

1. A Wal undergoing tests in the open water off the Ross ice shelf.

4. Supplies being offloaded from the "Arkham" at the edge of the ice shelf.

5. A shot taken from one of the Wal camera mounts of the strangely regular shapes or structures seen clinging to some of the peaks in the Antarctic interior.

The photos are provided in pristine condition and were intentionally printed on photo paper lacking a watermark or any other printing that would identify them as modern. They can be used as-is as props or as part of a collection of "At the Mountains of Madness" memorabilia, but directions for realistically aging the prints are available here on the blog.
Posted by Propnomicon at 1:59 PM

Labels: At the Mountains of Madness, Buy Cthulhu, Prop Photographs