The God of Rust and Corruption

Phil Bolton brings us this eldritch tome involved in one of the most mysterious incidents of the 19th century.


April 21st, 1857 was an unseasonably chilly morning, and Messr Barreau was seen by many locals and shopkeepers buying food, and oddly, a selection of cheap iron tools at the local shops. Apart from an unusually haggard, and distracted air, he seemed perfectly normal as he made his purchases and hurried home.

Sometime during that night, the citizens of the Rue Amandine became aware of a strong, rotten odor permeating the area, quite different from the usual odors from the nearby sewer system. Overnight, the smell became quite overbearing until by morning, the locals decided to try and track down this source of the overwhelming stench, which was eventually traced to the apartment of Messr Barreau. No answer came to their knocks and eventually the landlord was summoned with a key. Upon entering the room, the group was all but staggered by a miasma of mold and rot that permeated the dwelling until the retching group could throw opened the moldy window panes for air. Thick layers of dust covered every surface, metal items were found to be rusted and useless, food in the kitchen little more than piles of mold covered mush, and even the wine in an unopened bottle has later found to be reduced to vinegar. Worst of all, lying sprawled on the floor beside the table, lay the barely recognizable remains of Évariste Barreau, bloated, and partly decayed as if he'd been lying dead for many days. This despite the fact that neighbors swore they had seen the old man healthy and active only the day before. 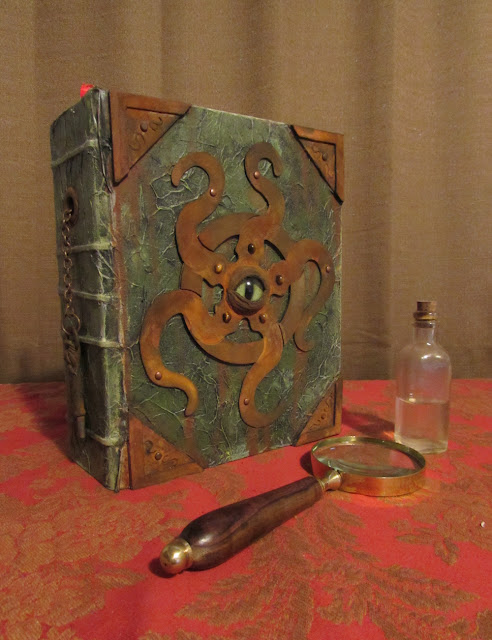 Always a privilege to have my work noticed sir. Thanks!

I'm rather pleased with how this one came out. although like its namesake, the rust does tend to rub off on your sleeve when carried around for too long. :) The raised cover pieces were made using chipboard cut out with a scroll saw.

I think in future I'm going to use more paint and less Sophisticated Finish rusting medium for pieces that'll be handled regularly.