Kenneth Strickfaden is one of the most influential film designers of the 20th century, despite being relatively unknown. His work creating the laboratory set for the original Universal "Frankenstein" continues to influence prop design even today. This series of photographs from an auction of Forrest J. Ackerman's film memorabilia in 2003 includes shots of Strickfaden's amazing prop work. 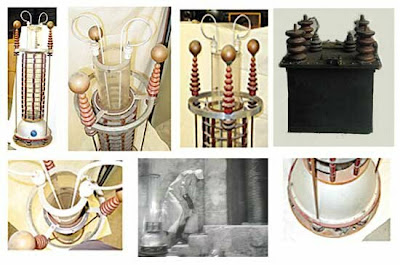 Variable Traveling Arc for Young Frankenstein...Elaborate traveling arc with an interior plastic tube surrounded by tiered circular rings. Three vertical metal rods are topped with wooden insulators and brass balls. The unit rests on a transformer base, which is a square wooden box with six turned wooden insulators on top. Appeared in its current form in "Young Frankenstein". Pieces of the Traveling Arc were used in different configurations in various films dating back to the 1930's. A key piece in Strickfaden's traveling science shows. 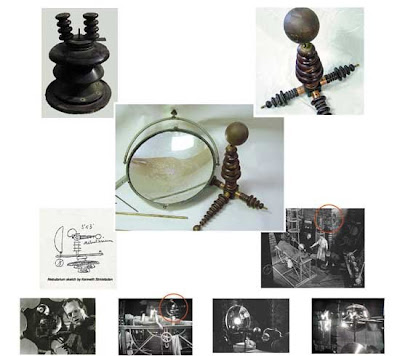 Nebularium...A quintessential piece of laboratory equipment from 'Frankenstein", Universal, 1931. Also appears prominently in "The Mask of Fu Manchu" (1932), and "The Bride of Frankenstein" (1935). The concave mirror of the nebularium could also be used to create dramatic shadow effects. A light bounced off the curved mirror and past an actor would throw a greatly magnified shadow on any surface. The shadow images of the Frankenstein monster in the Universal series were virtually always created with the use of the Nebularium. The Nebularium is comprised of a concave mirrored reflector with a T-configuration of wooden and metal insulators, and a 14 inch insulator with a 5 inch brass ball on top. Mounts on a heavy black base with two 5 inch turned wooden insulators.

Kenneth Stickfaden has an article on Wikipedia. I am sure everybody has seen his wonderful handiwork. In the past, many movie props were discarded, destroyed or simply lost. These movie props are priceless for their link to American culture and movie making.

Forrest Ackerman the master of prop collecting died two years ago and much of his collection was dispersed. There is a pretty good article on Wikipedia about him. Also, here is a link about the Ackerman collection: http://www.seeing-stars.com/museums/ForrestAckerman.shtml

Thanks for posting about these props. I always wanted one of those huge spark throwing props like a monster size Jacob’s Ladder device.

Kenneth Strickfaden's family will display original artifacts from the original "Frankenstein" movie, including laboratory equipment plans and drawings. Additionally, many of "Strick's" personal colored ink drawings will be shown. This is a large collection reflecting Strickfaden's talented imagination. ~ ~